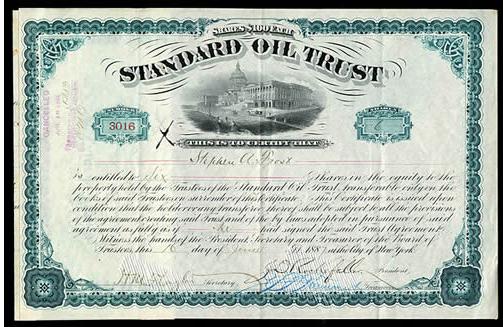 John had a challenging childhood. His father was a traveling snake oil salesman and moved his family around a great deal. In his teenage years, his father moved the family to the Cleveland area and left town again. At the age of 16, John went looking for his first job.

To quote from the book: “Despite incessant disappointment, he doggedly pursued a position. Each morning, he left his boardinghouse at eight o’clock, clothed in a dark suit with a high collar and black tie, to make his rounds of appointed firms. This went on six days a week for six consecutive weeks until late afternoon.” During this time John was quoted as saying “I was working every day at my business — the business of looking for work. I put my full time at this every day.”

John finally was hired as a bookkeeper for Hewitt and Tuttle, who were commission merchants and produce shippers. In this position, John began to see the power of the transportation business, which proved invaluable to him in the future. During this time, Rockefeller began a ledger of his own personal finances. He tracked every penny he received and all of his expenses. He followed this daily discipline the rest of his life. In his first three years of work, Rockefeller saved the equivalent of one year’s salary. This meant he was living off only 65 percent of his income.

At the age of 18, he and a partner raised $4,000 of capital and started their own commission house. Rockefeller borrowed $1,000 at 10-percent interest to launch his partnership. In his first year as a business owner, John tripled his income. One of his roles in his new partnership was sales. He would travel from company to company, selling his firm’s services. Today, this would be known as cold-call sales. As it turns out, Rockefeller was a persuasive salesman.

His biggest challenge throughout his entire business career was finding enough money to do all of the business he wanted to do. He was always searching for financing to grow his business and was not afraid of debt.

Four years after starting his first partnership, Rockefeller and his partners invested $4,000 into a 50-percent ownership of an oil-refining business. The investment was intended to be a small side business. One of the skills Rockefeller displayed was locating his oil refineries. His first refinery was placed in a location that would allow him to ship oil via water or railways. “This gave him the critical leverage he needed to secure preferential rates on transportation.”

Rockefeller’s goal was to be completely self-sufficient in his business and personal life. This meant he continuously eliminated anything he or his businesses were dependent on. His oil refinery once struggled from an oil barrel shortage. He quickly decided to build his own barrels. Once he was outraged at an outside plumber’s bill and decided to hire his own “in-house” plumber. They also did their own hauling and loading. He constantly searched for minor improvements for his businesses. His business management was so strong that he would never experience a single year of loss.

He quickly realized the possibilities in oil and decided to make this the focus of the business. However, he didn’t join the masses in the search for oil because it was too unpredictable. He wisely chose to focus on oil refining. This is where he realized he could exert maximum leverage over the industry.

As his company grew, he began to clash with his partners. He was not impressed with their work ethic and despised how they managed the company’s money. He felt his partners were weak and immoral and was uneasy being linked up to them because they were speculators. They constantly battled because Rockefeller wanted to borrow more money to grow the business while his partners were afraid of debt. At the age of 25, he decided to buy his partners out. The partners held an auction for the company and John won by bidding $72,500. This amounted to $652,000 in today’s dollars. He now had control of Cleveland’s largest oil refinery.

Rockefeller quickly saw that the overseas market was virtually untapped, and he could sell a great deal of his excess kerosene production. Within a short time, two-thirds of his Cleveland production was being sold overseas. His younger brother opened up an office in New York to oversee the sales of oil overseas. The decision to set up an office in New York allowed Rockefeller to borrow much-needed capital from Wall Street bankers.

Here is an insightful quote from John in the book on borrowing money:

“One can hardly recognize how difficult it was to get capital for active business enterprises at that time.” If Rockefeller ever came close to groveling, it was in his eternal appeals to bankers. In the beginning we had to go to the banks, he vacillated between caution and daring: He often went to bed worrying how he would repay his large volume of loans, then awoke in the morning, refreshed by a night’s sleep and determined to borrow even more.” In fact, once he capped out his borrowing ability at local banks, he began looking for large individual investors. It is interesting to note that John always presented honest and accurate facts and he promptly repaid each and every loan. This display of character increased the trust level and opened many future doors for him.

His use of bank financing gave him the ability to grow his business at an incredible pace. He was able to win many bidding contests for competitors’ refineries simply because he had more funds available.

In 1867, Rockefeller began assembling a top-notch management team. His team would help him transform this Cleveland refinery into the world’s strongest company. “They were prepared to go as far and as fast as the marketplace allowed.”

This article will be continued in next week's blog post. However, I wanted to recap a few important lessons from Rockefeller. Here they are:

1. Be careful of dependence: Any time Rockefeller was dependent upon
something, he quickly eliminated his dependence. In some cases, he
turned the situation around and made the vendor dependent on him. (Ex:
Tank Cars for Railways.) Take some time to make a list of everything your business is dependent upon. Next setup an action plan to reduce or eliminate this dependence.

3. He focused on control. Rockefeller bought out his partners to gain control of his first oil refinery. Most people try and avoid control and prefer to have others make key decisions. Not Rockefeller.

4. He was not afraid of debt to grow his
businesses. It was very evident that Rockefeller used debt in the early stages of his business to grow. Others were afraid to borrow. He did the opposite and borrowed heavily at the right times and for the right reasons to grow his business. What could you do in your business if you had access to additional borrowed funds right now?

5. He was very decisive and action-oriented.
He understood the importance of speed. Within three years, he acquired
all of his major competitors and controlled over 90 percent of the
crude oil market. The speed of his acquisitions was remarkable.
Remember during this time, there were no planes, e-mail, Internet,
faxes or telephones. What can you accomplish in your business during the next 3 years?