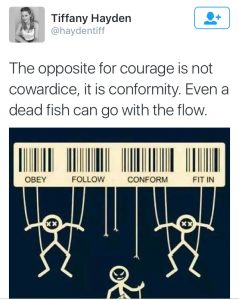 “The opposite for courage is not cowardice, it is conformity. Even a dead fish can go with the flow”

A conformist behaves according to socially acceptable conventions or standards. In other words, they do what everyone else does in order to fit in. The problem is the “crowd” doesn’t think. They copy.

So the conformist lives a thoughtless life.

We can conform in every area of our lives including:

Conformity in and of itself isn’t bad, if you’ve thought about it and you’re happy. The problem is most people don’t think about things. They just do what everyone else does and this leads to an unhappy life.

Think about the lives of the masses…

They’re overweight. They’re stressed out. They can’t sleep. They’ve got one or more medical problems. They work 40 plus hours a week. They don’t have enough money saved for retirement. They live pay check to pay check. They’re unhappy. They drink too much. They’re in bad relationships. (The divorce rate is rather high) They don’t spend any meaningful time with their spouses and/or children.

Several years ago I had a very important mentor. He was incredibly smart regarding business and was very wealthy. The problem was he worked 10 hours a day, 7 days a week. He didn’t have any meaningful relationships with his family and he was miserable. He really was.

I WAS COPYING HIM.

Oddly enough during this point in my life, I was incredibly stressed out. I wasn’t spending much time with my family. I was up at 2 or 3 in the morning every night. I developed Hashimoto’s disease (thyroid) and now take medication daily. I lost friendships over business. I chased every dollar. I was miserable.

When you stop and think about it, it’s rather funny. I was copying what I saw without really seeing. It was very easy to see that my mentor was miserable, but I copied him anyhow. If I had continued on that particular path, I would have ended up exactly like my mentor.

I had to think for myself. I had to stop conforming and live MY life.

A word of warning. It does take courage to walk away. Most people will think you’re crazy and this is because they’re conforming. They’re not paying attention. They’re not thinking for themselves.

Here are four questions I found that were very helpful: