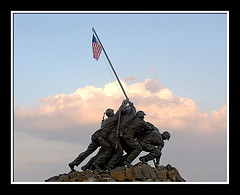 A great deal about military strategy can be learned from Sun Tzo's "Art of War". Portions of this article of been excerpted from Sun Tzo’s work.

A definition of war is as follows:

“A concerted effort or campaign to combat or put an end to something considered injurious.”

If this is the case, maybe we should declare all-out war to eliminate each and every injurious thing we face from day to day. To go to war, we must become battlefield warriors. Warriors:

What this seems to boil down to is that someone going into war must be willing to do anything that will help the people they care about.

The question I obviously have for you is:

Are you willing to go to war to build your business?

If your answer is no, then stop reading. You're wasting your time. I’m not kidding. I'm fed up with agents who aren't willing to do whatever it takes to build their businesses. To build your business and win your war,  you’ll have to:

1. Face your fears.
2. Transform yourself into a completely different person.
3. Sacrifice your free time.
4. Risk losing your money.
5. Let go of or lose friends.
6. Actually implement all of the ideas you’ve been talking about.
7. Learn to take massive action.
8. Learn to be decisive.
9. Act with speed.
10. Accept failure as part of the process.

I believe financial dependence is injurious to my family. I’m willing to do all of the things listed above in order to end this injurious situation. In fact, I’ve personally gone through everything I listed above.

You don’t have a choice. It’s required. Are you willing to change your life this year? And no, you cannot blame the economy or housing crash for your situation. You must take 100% responsibility.

Since you’re still reading this article, it is safe to say that you have agreed to the terms above. You’re ready to change your life and step into your own war to build your business!

How do you win your war?

The answer can be found by studying Sun Tzu, who is known as one of best military strategists in history.

According to Sun Tzu, in the Art of War, there are five essentials for victory in war. They are:

Now, let’s translate these five essentials for your war to build your business:

Trying to be everything to everyone is a recipe for disaster in real estate sales. You offer no "real" benefits to prospects and cannot exert any dominance over your competition. You must pick a niche within the market and focus 100% of your time and energy to dominate the niche.

2. He will build an awesome business when he knows how to turn adversity into opportunity.

The wealthiest people through history have always found and exploited opportunity in the midst of adversity. Today in the States, we are in the midst of adversity. Hundreds of thousands of agents have left the business because they aren't able to "see" opportunity. The largest share of sustainable wealth was created during the Depression. Study John Rockefeller, Andrew Carnegie, Conrad Hilton and others to see this in action. The time for you to find opportunity is today, not tomorrow.

3. He will build an awesome business when surrounded by people with similar goals and a similar mindset.

You are who you spend time with. If you spend time with struggling real estate agents, you'll be a struggling real estate agent because you think and act like they do. You must get around people who have what you want. Their thinking does rub off on you. This means that you’ll probably have to let go of your old friends and make some new ones. I have gone through this myself. It is hard to do, but required. This obviously applies to people on your team. Your business is only as good as your team members.

4. He will build an awesome business when he has the courage to do the opposite of what everyone else is doing.

Do you follow the masses? If so, you’ll be slaughtered. You must think independently. Set a new rule for your actions. Do the exact opposite of what everyone else is doing. Advertise more now. Recruit great agents now. Implement more lead conversion systems now.

5. He will build an awesome business when he has become "pissed off" enough to sacrifice everything for his business.

Success requires change. You must begin to think differently, otherwise you’ll do the same things and get the same results. It seems that people don't change until they've hit bottom. It's at the bottom where you get pissed off enough to do what's required. I can still remember when I hit my bottom. I decided once and for all to stop talking and start doing. I committed to doing whatever it took to build my business and I followed through.

In the next article, I'll share Sun Tzu's two methods for attack in war and how you can apply them in your business. Watch for this next week!