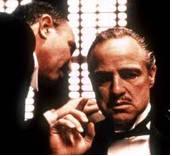 Maybe it’s a guy thing, but The Godfather movie (at least the first one) is probably the best movie in history. I love movies, TV shows and books about the mafia. I have the entire Sopranos series on DVD and have watched every single show. I have all three Godfather movies on DVD, too. This summer, I downloaded The Godfather book on my Kindle and thoroughly enjoyed it. The book is a page-turner and is actually better than the movie. I highly recommend that you read this book!

Well, it’s a great book and I’m sure you’ll love it. But this isn’t the main reason I’m recommending it for you. The main reason is because you can learn a lot of lessons from Don Corleone (the Godfather) that you can apply to your real estate business. The Godfather’s strategy was illustrated in the beginning of the book on his daughter’s wedding day. On this day, the Godfather’s friends, family and business associates could ask him for a favor, and for the most part, the Godfather couldn’t refuse. Many friends and business associates lined up to have a meeting with the Godfather to request their favor. Once the Godfather agreed to help, he would stop at nothing to comply with the requested favor.

He would use his power, wealth, influence, connections, employees and every other resource at his disposal to ensure he performed the task required. Here’s how this was explained in the book by the author…

“Don Vito Corleone was a man to whom everybody came for help, and never were they disappointed. He made no empty promises, nor the craven excuse that his hands were tied by more powerful forces in the world than himself. It was not necessary that he be your friend, it was not even important that you had no means with which to repay him. Only one thing was required. That you, you yourself, proclaim your friendship. And then, no matter how poor or powerless the supplicant, Don Corleone would take that man’s troubles to his heart. And he would let nothing stand in the way to a solution of that man’s woe. His reward? Friendship, the respectful title of “Don,” and sometimes the more affectionate salutation of “Godfather.” And perhaps, to show respect only, never for profit, some humble gift—a gallon of homemade wine or a basket of peppered taralles specially baked to grace his Christmas table. It was understood, it was mere good manners, to proclaim that you were in his debt and that he had the right to call upon you at any time to redeem your debt by some small service.”

“Don Corleone received everyone—rich and poor, powerful and humble—with an equal show of love. He slighted no one. That was his character.”

The Godfather obtained the respect of everyone in his community simply by helping people solve their problems. Or to put it another way, the Godfather earned respect by adding immense value to those in his community. Here’s another quote from the book to highlight the Don’s approach:

Don Corleone was gentle, patient. “Why do you fear to give your first allegiance to me?” he said. “You go to the law courts and wait for months. You spend money on lawyers who know full well you are to be made a fool of. You accept judgment from a judge who sells himself like the worst whore in the streets. Years gone by, when you needed money, you went to the banks and paid ruinous interest, waited hat in hand like a beggar while they sniffed around, poked their noses up your very asshole to make sure you could pay them back.” The Don paused, his voice became sterner. “But if you had come to me, my purse would have been yours. If you had come to me for justice those scum who ruined your daughter would be weeping bitter tears this day. If by some misfortune an honest man like yourself made enemies they would become my enemies”—the Don raised his arm, finger pointing at Bonasera—“and then, believe me, they would fear you.”

I have underlined the most important part of this excerpt. It highlights how far the Godfather was willing to go to help others with their problems. Now, I realize this is just a book, but take a second and put this into context for your life. How awesome would it be if you had someone you could go to and get their help solving your biggest problem or challenge? Once this person agreed to help you with your big problem, you wouldn’t have to worry or fret again on the matter.

It would be awesome, wouldn’t it?

This “problem-solver” would probably become one of the most important people in your life. So here’s the million-dollar question for you…

Why don’t you become this “problem solver” for the people in your community?

As I read the book, I began to think about copying the Godfather’s “problem-solver” strategy in our real estate businesses. Our community would be home buyers, sellers, renters and investors. Anyone could come to you with his or her real estate problem, and one way or another, you would help them solve it! You would use your knowledge, experience, professional network and all of your resources to solve their problem and add value to their lives.

How valuable would it be for your business if you had the reputation of THE problem-solver in your area?

You would earn the greatest respect of those in your community. Respect is far more valuable than money. The reason why is because money is replaceable, while respect isn’t.

To help you see the value of respect, think of respect as if it were a savings bond. A savings bond is an asset that pays you interest as long as you own it. Respect is an asset that can be leveraged for as long as you have it. Once the Don earned someone’s respect by solving their problem(s) or adding value to their lives, he leveraged the respect earned into income and opportunity. He did this using the “Law of Reciprocation”…

“It was understood, it was mere good manners, to proclaim that you were in his debt and that he had the right to call upon you at any time to redeem your debt by some small service.”

Once he helped solve someone’s problem, they were indebted to him and they were expected to repay this debt at some point in the future. According to LawofReciprocation.com…

Relationships between people or institutions are based on exchange in which all parties have a mutual understanding of their rights and obligations. Relations between members of an immediate family or between spouses are based on obligations such as obedience or respect. Relations can be forged through gifts or personal favors and bring with them obligations and expectations. For every action, something is expected in return.

Those who do favors are highly esteemed; they are recognized as people who have respect for those around them. Every previous or current situation produces expectations for future behavior on the part of the giver and gift recipient. Or maybe you’ve heard Zig Zigler’s famous saying…

“You can have everything you want in life, if you help enough other people get what they want.”

By giving to others, you set yourself up to receive from others. The Godfather gave to others and in turn set himself up to receive from others. Every single time he helped someone, he set up a new savings bond, which would pay him interest at some point in the future. And while the book paints him as a heroic figure, the truth is, he was a criminal. You know that he was getting something out of it every time he solved a problem.

The cool part about the Godfather’s approach is there are problems everywhere – especially in the real estate market.

Each and every problem represents an opportunity for you to earn respect. The more respect you earn, the more savings bonds you add to your portfolio.

You can use the Don’s strategy in all areas of your business, including lead-generation, lead-conversion, referrals, joint-venture relationships and when communicating with your database via hard-copy and email newsletters. Take some time to really think about this for your business. As you do, remember the bigger the problems you solve, the more respect you earn.

It’s all about respect…

P.S. As I read “The Godfather” on my Kindle, I highlighted everything written about Don Corleone. I have made my highlights from throughout the entire book public and you can read each one at:

P.P.S Since I referred to savings bonds in this newsletter, I thought I should also mention a report I wrote about how you can use savings bonds to pull buyers and investors off the fence and get them to buy. You can download the report at http://www.BuyersOffTheFence.com As you read this special report, please pay attention to how I’m using savings bonds to solve a BIG problem in the real estate market. This strategy is perfect for the Godfather approach detailed in this newsletter.

P.P.P.S. If you enjoyed this newsletter and found it valuable, you should test-drive my Master Marketer membership for 30 days for just $1.00 at http://www.MMClubTestDrive.com. As a member, you’ll receive “outside the box” marketing ideas, access to marketing test results, many of my valuable reports on how to attract leads, automatically convert prospects into clients, done-for-you marketing tools, press releases and client newsletters you can copy and use in minutes. If you don’t find the membership to be valuable during the 30-day test drive, simply cancel your membership by sending an email to support@renegademillionairestrategies.com and you won’t be charged another penny!