Way back in 2003, I ended up reading a book titled, “Greatest Money Making Secret in History” (PDF Download link) by Joe Vitale.

John D. Rockefeller did it since he was a child. He became a billionaire.
Andrew Carnegie did it, too. He became a tycoon.
What’s the greatest money making secret in hisory?
What’s the one thing that works for everyone?
Give money away.
That’s right. Give it away.

In this book, Vitale presents the idea that giving IS the greatest money making secret throughout history. In essence, the more you give, the more you’ll receive.

When I first read the book, I was extremely disgruntled with the idea of “giving.” I had previously walked away from my CPA position with a large public accounting firm. At the firm, I encountered extreme pressure to donate to a large well known charity. The pressure was so intense it was basically a requirement of every employee. This suggested donation was also specified in terms of a percentage of salary and it was tracked by my firm. Kind of like the mob asking you to pay for protection!

I didn’t mind the idea of making a donation; however, I wasn’t happy with the idea of a forced donation. We all hate being forced to do anything and end up automatically resisting whatever is being forced upon us. Unfortunately, this situation ruined the joy of giving for me. 🙁

Also, being in accounting at the time, I understood that a significant portion of donations collected by large charities went towards the charity’s overhead and fundraising activities instead of for the actual purpose of the charity. This knowledge also turned me off to the idea of giving.

Vitale’s book helped to change my thoughts on giving.

I have no idea if giving is really the greatest money making secret in history, but it certainly seems to work. The best part about giving is how it makes you feel. When you give because you really want to help, you get an incredible sense of joy.

Over the years, I’ve made various donations to different charities. Each donation was made because I wanted to make it, not because I was pressured into making it. I’ve also learned to give directly to people I know who are in tough situations. I simply send cash through the mail without any return address. I don’t want them to know I’m giving them money. I don’t want any recognition and I don’t want anything in return. I simply want to help them.

Here’s the craziest part about all of this…

As you probably know, I have a portfolio of rental properties. From time-to-time, some of my tenants will hit rough patches in life. I know this because they don’t pay their rent on time and when I talk with them, I end up hearing what their problem is and why they’re struggling. Depending on the situation, I may send them money anonymously. I’m not sending them this money because I want them to use the money to pay their rent. I’m simply trying to help them.

This week, we’re evicting a girl from one of our apartments. She wasn’t able to pay the rent and we needed to move forward with a new tenant. Evictions are part of the business. Even though we were evicting her, I sent her cash. I know she really needed the money.

Want to know what? It felt really good.

This is a complete 360 for me when it comes to non-paying tenants. In the past, I didn’t have any compassion for someone who didn’t pay their rent. Today, I do…. especially for tenants who are really trying, but keep getting kicked when they’re down. I now realize I have an incredible opportunity to give through the rental property portfolio.

For some reason it seems that a majority (60% to 70%) of my tenants are single mothers. These ladies don’t seem to get much help from the fathers of their children. This is really hard for me to watch for two reasons:

1. My parents got divorced when I was two. My mother raised me and put me through college…. as a single mother.
2. I have two daughters and wonder what their future holds. Could they become single mothers in the future?

The best part about giving directly to those you know who are in need is that 100% of your gift helps. Not one penny goes to overhead or fundraising expenses.

In Vitale’s book he suggested there’s a correlation between the amount you give and the amount your receive. Give more, get more.

I’m not sure this is true. 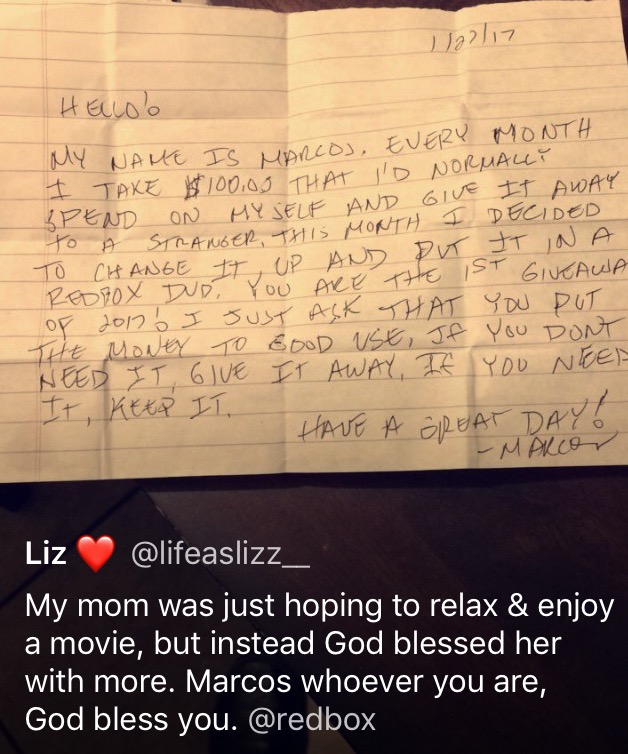 Marcos put $100 in a Redbox DVD and returned it to the machine. Liz’s mother happened to check out the DVD and received the $100 gift.

You can do something similar and you don’t have to give $100.

Based on my own personal experience, the money you give does come back to you. You’ll never know where it will come from, but it certainly does come back. Plus, you get to experience the joy of giving, which is something really fantastic.

If you want to read more about giving, I highly recommend Victor Boc’s book titled, “How to Solve All Of Your Money Problems Forever.” He does a great job of explaining why giving changes the flow of money in our lives.

By the way, this post was spurred from the following email I received this week:

“While there are other real estate “coaches” out there, it’s my opinion that none does any more than provide methods of building the “traditional” real estate model.  Your strategies, in my opinion, bring a breath of fresh air to this industry and I just want to say, “thank you, Rob”.  I would also like to make a donation to a charity of your choice in the amount of one hundred dollars in recognition of all you do for us.  Please let me know the charity to which you want the donation made and I’ll be happy to make that donation. Thanks for taking the time to read this message and for all you do for your real estate community.  I look forward to hearing back from you, soon.”

I’ve been coaching real estate agents for 10+ years and can only remember two times where someone offered to make a donation on my behalf. This was the second time.

The agent who emailed this to me is using the greatest money making secret in the world to his advantage.

Give it a try and see what happens!

2 replies to "The Greatest Money Making Secret in History?"