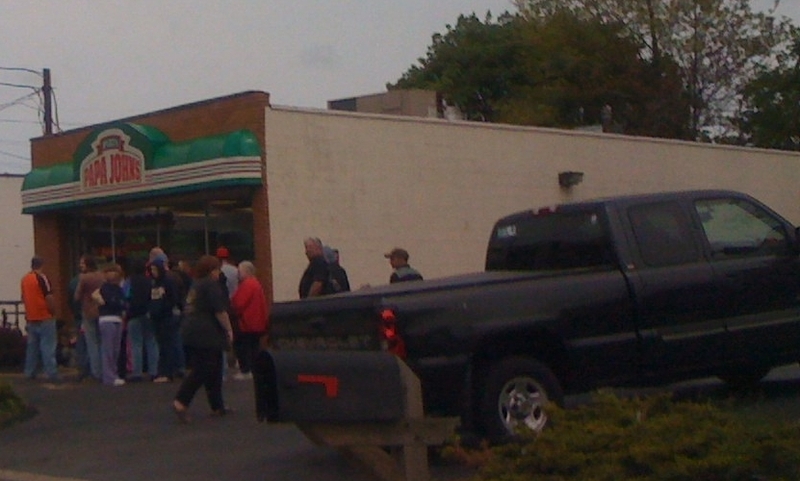 Papa Johns decided to use this negative publicity to their advantage. They apologized publicly to Cleveland fans. In addition, to make it up to us, they decided to sell pizzas for 23 cents on May 8th.

Papa Johns got millions of dollars of free publicity. They were featured on every news channel and almost every radio station. People flocked to Papa Johns to get their 23 cent pizzas. The picture above is from the Papa Johns near my house. The line actually wrapped around out of sight. From what I hear, many people waited in line for well over an hour to get the discounted pizza. Other businesses close to Papa John’s locations complained about parking problems and traffic.

It was estimated that Papa Johns sold over 20,000 pizzas on this one day. They definitely "lost" money on these 23 cent pizzas. However, they turned this negative publicity into a massive marketing campaign. The publicity they received far outweighed the money "lost."

In fact, other pizza outlets (Pizza Hut and Dominoes) were surprised at the increase in their pizza sales on this one day, too. When people got frustrated waiting in the long lines at Papa Johns, they simply ordered pizza elsewhere at full price. Other smart merchants quickly capitalized on this publicity by making special 23 cent offers. One company offered 23 cent cell phones. Another offered 23 cent Club Soda pops…

As a small business owner, I couldn’t imagine the value of the publicity they received. A larger advertisement in one of our Cleveland area papers would cost around $5,000. They got publicity in this paper and all others before the May 8th, on May 8th, and then again after May 8th by the frenzy they created. People are still talking about it several days later. Priceless!

How can you use this strategy in your real estate sales business?

P.S. You can still register for tomorrow’s Free Webinar titled "How to List and Sell Bank Owned Homes." Go to: http://www.ProfitWebinar.com right now while spots are still available!

1 Response to "How one company turned adversity into opportunity"