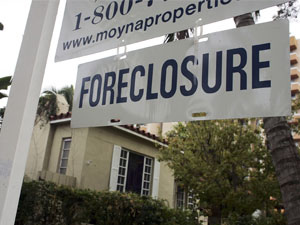 As real estate agents, we should pay attention to these trends. Obviously, foreclosures are very challenging for the families involved. I certainly wish the foreclosure rate were decreasing, instead of increasing. However, it’s simply not the case. We need to pay attention to reality. We also need to see opportunity in adversity.

Many agents are making some serious money listing and selling bank owned (REO) homes. Agents who specialize in listing and selling bank owned homes have watched their sales double or even triple over the last 18 months and will surely see even greater sales volume over the next few years as the housing market languishes.  Experts estimate that 2.5 million foreclosed homes will hit the market this year alone.

Daniel Mudd, the President and CEO of Fannie Mae, the largest financier and guarantor of U.S. home loans, predicted on Tuesday that the housing market downturn is likely to persist into 2010.

Countrywide Financial, the largest U.S. mortgage lender, said on Wednesday that foreclosures and late payments rose in December to the highest on record, sending its shares tumbling for a second day to their lowest in nearly 13 years.  Like many lenders, Countrywide has been hurt by falling home prices, rising defaults, and tighter capital markets. Countrywide Chief Executive Angelo Mozilo has said the housing slump is the worst since the Great Depression.

Chief Economist, David Rosenberg at Merrill Lynch, goes so far as to warn, "Real estate pricing in general can expect to be in the doldrums through 2012."

The biggest problem is the glut of homes for sale — more than 10 months’ worth. And about 2 million of those homes (about 2.6%) are vacant, with banks or builders trying to get them off their hands.

The number of vacant homes is expected to rise further this year because a record number of homes are entering foreclosure. And hundreds of thousands of homeowners with sub-prime, adjustable-rate loans will face higher monthly payments. For some, it will be the last financial straw.

So where does this leave you, the residential real estate agent?  Will you prosper in the New Year? If you are not already listing bank owned homes you should seriously consider learning the REO ropes. A really good friend of mine, Frank Patrick, has been a REO Broker for over 7 years. He has sold over 1,000 bank owned homes. In fact, in 2007, he closed 204 transactions. Frank projects that his sales will easily top 300 homes in 2008. Many agents are struggling in today’s market, but Frank is jamming. Frank is definitely a Renegade Millionaire agent and we can all learn something from him.

Frank repositioned his business, with a few slight adjustments, to be the agent of choice for banks, mortgage lenders and private mortgage insurance companies stuck with foreclosed homes. He shares some of his strategies at his REO website. If you want to participate in the projected 2.5 million bank owned home sales, you might want to start to position yourself as the agent of choice, just like Frank has.