An advertisement promoting the interests or opinions of a corporate
sponsor, often presented in such a way as to resemble an editorial.

An advertorial is an advertisement that runs in your local newspaper. The goal is to make the advertisement look and read like a regular article in the newspaper. At the end of this special article, a free offer is made to the reader. The free offer could be a free report, free CD, free class, or a free book.

The purpose of the advertorial was to generate leads. These advertisements tend to cost a little more to run because they are larger in size than a classified or display advertisement. However, in most cases, they generate a larger number of leads. The higher cost is justified by the leads generated. In many months, I was able to hit my target lead generation goal of 400 leads from one, well placed, advertorial advertisement.

In this blog post, I'll show you how to follow the rules imposed by your newspaper and still run your advertorial so that it still generates a ton of leads for you. Consider the following advertorial found in the USA Today: 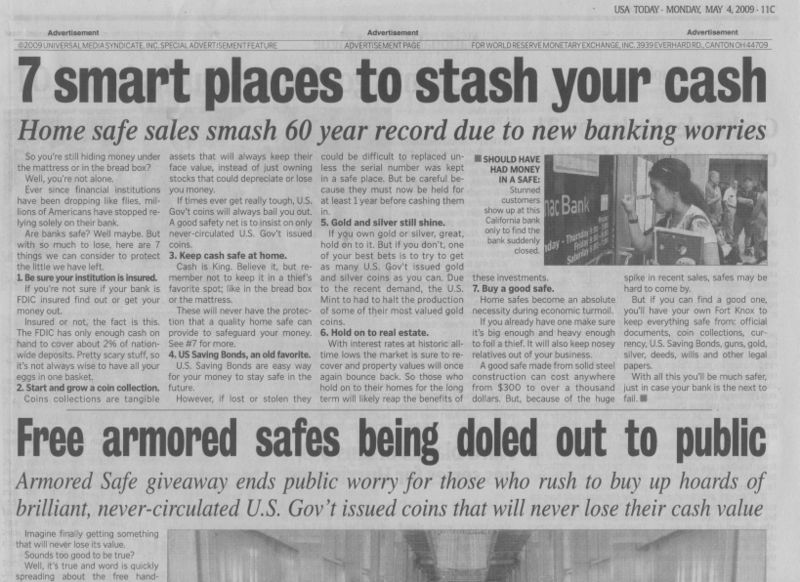 I've only included part half of this advertisement. It is one awesome advertisement and there is a great deal for us to study.

The most important thing for you to see is that there are two advertisements combined together. The first advertisement is on the top. The second advertisement is underneath the thin line and has the headline "Free armored safes being doled out to public."

The newspaper has required this marketer to paste the words "Advertisement" along the top of the first advertisement in several places. In fact, I count the use of "Advertisement" in 5 different places. This would typically drive response down dramatically.

However, the top advertisement is really an article without any special offer. It includes a compelling photo and 7 safe places to save money when your worried about bank failures. The real advertisement is the second one offering the armored safe giveaway. It follows all of the rules of a great advertorial and includes a special free offer for readers.

It's simply brilliant and it works.

There is also a very powerful indirect marketing lesson included in this advertorial. The lesson has a direct impact on you and your business. Can you find it?

How One Company Turned Adversity Into Opportunity