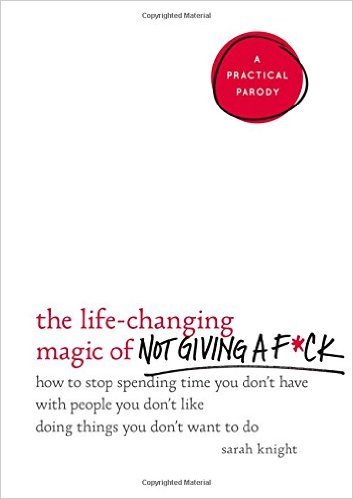 “The Life Changing Magic of Not Giving a Fuck – How to Stop Spending Time Your Don’t have with People You Don’t Like Doing Things You Don’t Want to Do.”

Um, best book title ever? Possibly! What an awesome book. Yes, it’s a twist on the popular Japanese decluttering and organizing book.

“I’ve developed a program for decluttering and reorganizing your mental space by not giving a fuck, wherein not giving a fuck means not spending time, energy, and/or money on things that neither make you happy nor improve your life (annoy), so that you have more time, energy, and/or money to devote to the things that do (bring joy). I call it the NotSorry Method. It has two steps:

After reading this book, I decided to make a list of things I’ve decided to not give a fuck about anymore. Understand that I probably gave way too many fucks about several of these things in the past. I’ve just decided to stop giving a fuck now and life is a lot better.

“The first time I met someone who just didn’t give a fuck was in my early twenties. We’ll call him Jeff. A successful business owner with a large circle of friends, Jeff simply could not be bothered to do things he didn’t want to do. An yet, he was widely liked and respected. He was perfectly nice, sociable, and well-though-of-guy, but he clearly reserved his fucks for things that were especially important to him – have a close relationship with his kids, playing golf, catching Jeopardy! every night. The rest of it? Could. Not. Give. A. Fuck. And he always seemed so positively self-satisfied and, well, happy.”