On Friday morning I was out for a morning run when the dreaded call came.

It was a call that I knew was coming, just not when it was going to actually come. The call was to let me know that my friend and partner, Joe Mercadante, had passed away. Joe was just 48 years old.

Even though I knew this call was coming, I completely lost it. I couldn’t hold back the tears. The magnitude of his passing really hit me. I finished my run with tears streaming down my face.

Joe and I have been friends since high school. We were part of larger group of guys (nicknamed the Busch Boys because we always drank Busch beer) that still remain friends today. We’ve all been through a lot together including: marriages, divorces, children, work problems, financial problems, life problems and more. Joe is our first passing and it’s a massive loss.

Back before the 2008 crash, I had helped Joe buy 20 rental properties. He became a legend in my world for buying so many homes in just one year. At one of our client appreciation events, I gave Joe a trophy and named him client of the year: 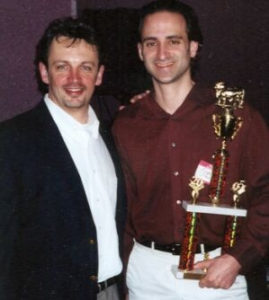 Joe and I were also partners in a few other larger deals. Throughout all of my partnerships with different people (and there have been many), Joe was the only person who ever carried his weight. He was the only one who always followed through and did what he said he was going to do. Every other partner I’ve had bailed when the shit hit the fan, as it always does.

Joe even stood strong in one partnership when I bailed.

When I did the same thing to him that everyone else had done to me.

I had curled my tail up and walked away from the property. Joe refused to quit and kept things going. I was thinking short-term while he was thinking long-term. I finally realized what an ass I had been and got back to work with the property and with Joe and another partner. Eventually, the three of us turned the place around and everything ended up working out.

1. Joe handled the real estate crash strategically and with a great deal of class. He had a large portfolio of investment properties (the properties I helped him buy) that all lost significant value. He was pissed, but kept plugging away with his plan. He never once abandoned a partner. He was open and honest with everyone including his tenants about what he was doing. Sadly, I cannot say the same thing for myself.

2. Before the crash, Joe had loaned money to one of my businesses. I had paid most of this loan back; however, I stopped making payments to him because of the financial losses I had suffered. I rationalized this by telling myself that I had paid him back all of the principal he had loaned me. The problem was that I was supposed to pay him interest and I didn’t pay as agreed. Again, Joe handled this with class even though I had broken my promise to him. Years later, I paid Joe back what I owed him finally wiping the debt clean. It didn’t seem to matter to him at that point because he had already forgiven me. He was always operating at a higher level that I was.

3. And finally, Joe handled his cancer diagnosis with unyielding strength and courage. Joe had been accepted into this trial radiation program to treat his cancer. His insurance company denied the treatment. Joe appealed this denial all the way up to the highest level in the state and finally won. The appeal process took so long that his cancer had spread into his liver. His chemo and radiation treatments brought him incredible discomfort, yet he stood strong and went into each one as complete Bad Ass.

Back in March of this year he was having stomach pains, which turned out to be stage three pancreatic cancer.  When Joe was finally diagnosed, I had an idea of how things would go. I’d been through this before with my mother. I was worried that he didn’t have a lot of time left. This is something I couldn’t say to him, because he was focused on beating cancer and he wouldn’t entertain any thought that suggested otherwise.

In both situations (Joe and my mother), I mistakenly thought I had more time with them. I knew both cancers were terminal, but I didn’t consider that the last month of the person’s life is not pretty. In many cases, they’re unable to talk due to complications they’re struggling with. Joe fought for six months, but he didn’t talk with many people for the last six or seven weeks.

I didn’t know the last text I received form him was going to be the LAST text.

I didn’t know the last email I got from him was going to be my LAST email from him.

I realize that I’m frequently “Robby Downer” because I write about how short our time is and how we tend to ignore this reality. I write about this a lot because we NEVER know what the future holds for us, or our loved ones.

In one conversation with Joe this summer, he said… “Why me? I am healthy. I exercise. I don’t smoke. I don’t drink excessively. I’m not overweight. I go to the doctor. There is no cancer in my immediate family. How did I get pancreatic cancer?”

Joe did everything anyone could do to prevent getting cancer and he still got it. It makes absolutely no sense whatsoever.

My weak reply was… “Joe, you were dealt a bad hand and you’re playing your bad hand as well as you possibly can. The next time the cards are dealt, I might end up with the bad hand. I could end up with cancer next month. We just never know what’s coming our way.”

If there’s anything we can extract from the loss of a loved one, it is that we need to stop taking the important people in our lives for granted. We need to try and appreciate everything and everyone we have NOW.

We need to play our cards right when we have a good hand because the day will soon come when the wrong cards are passed our way.