The picture above was taken by my wife during our recent trip to Hilton Head. The little girl flying the kite is my 5 year old daughter.

Three years ago, we were spending a week at our ocean front condo in Myrtle Beach. One day, my daughters watched another little girl fly her kite on the beach. As you might imagine, they instantly wanted a kite to fly, too. So that evening we went out to dinner and went shopping. We went shopping at a fantastic place called "Broadway At the Beach." Believe it or not, we found a little kite shop. It had some amazing kites for sale.

I asked one of the folks working at the kite shop if they could recommend a kite that would be easy to fly. I told them I wanted a starter kite because my daughters were young and needed all the help they could get. The clerk recommended a specific kite and told me it was the easiest one in the entire store to fly. I quickly bought two of these kites for my two daughters. If you're a
parent, you realize why I had to buy two kites. One just wouldn't do.
They would fight over who got to fly the kite and when.

My kids were so excited!

The next morning, they woke up early and wanted me to take them down to the beach to fly their new kites. I grabbed my coffee and down we went…

We opened the kites and got them all setup. I showed them how to hold the kite up and I told them to run and let the string out as they ran. They both ran their little hearts out, but the kites wouldn't fly.

Being the good Dad that I am, I decided to show them how to fly their new kites. I held the kite up and started to run hoping the kite would lift slowly into the air. It didn't.

So I ran even harder trying to get the kite to fly. It still didn't. I began to think that we bought the wrong kites. The clerk at the store must have misunderstood me. I asked for the easiest kites to fly, not the hardest.

Eventually we decided to pack up the kites and try another day.

For the last few years, I've tried to help my kids fly these two damn kites on 20 different occasions – all with no luck. On several of these attempts, we tried to fly the kites in our neighborhood. Picture me running down the middle of the street at full speed holding this colorful kite. Instead of the kite flying in the air, it was dragging on the ground.

It was a little embarrassing….

I'm sure my neighbors laughed as they watched me trying to fly these two damn kites. In one attempt, the kite got tied up on my neighbors mailbox and I had to spend 20 minutes trying to untangle it.

We stored these two damn kites in our beach/pool bag. They were always with us.

On this last trip to Hilton Head we encountered a massive wind storm one day at the beach. I decided to try and fly these two damn kites one more time.

I untangled the first one and lifted up prepared for another embarrassing kite run, when all of a sudden it took off flying. I let the string out a little bit and it went higher. I quickly handed it to my 5 year old trying to let her fly it before it came crashing down. As she began to fly her kite for the first time, I untangled the second kite. I lifted it up and it started to fly, too! Within seconds both kites were flying beautifully in the sky. 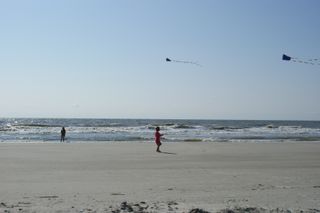 My kids were finally flying their kites after 3 years and attempts. As I watched them fly their kites, I realized that this exactly what I went through building my real estate business. I struggled for several years trying to build my business without any significant success and then one day everything changed.

The reason the two damn kites never flew in all of our attempts was because we didn't have enough wind. The wind easily lifted the kites softly into the air. I incorrectly thought that we could get the kites up by running and the wind would catch them and take them higher.

The reason I struggled in business for several years was because I wasn't generating enough leads. I worked my tail end off trying to build my business without any major change. Notice the similarity in running faster hoping to get the kite to fly. As soon as I increased the number of leads generated from week to week, we began selling more homes. The inflow of leads had the same impact on home sales as the wind did to the kites.

Eventually I learned that I needed to generate a minimum of 100 leads a month for each full time agent I had on my team. This number of leads was the wind that lifted our businesses to success.

Last week, I hosted a closed door mastermind meeting with some of the smartest real estate agents in the industry. I noticed a commonality among those agents who were doing the best – massive lead flow. These agents make lead generation the number one priority in their businesses. This priority helps every other area in their business. The agents on their team stay with them. More homes sell each month so they have cash-flow. They can afford to hire personal assistants to help them achieve more in less time.

If you're struggling to sell homes, increase your lead generation TODAY. Make it a goal to generate a minimum of 100 leads per full time agent on your team. If you work by yourself, you must generate at least 100 leads a month.Start by generating 200 leads per month for a few months to kick things into over-drive. Sell some homes and collect a few checks and then you can reduce the number of leads generated to 100 per agent.

Back to the two damn kites…

After about 5 minutes of flying their kites, my daughters got bored and handed the kites back to me. They wanted to go look for sea shells… Damn kites!

Yes, this is a funny ending to the kite story. The problem is that real estate agents do the exact same thing in their businesses. They will increase their leads for a few weeks and then get distracted by something else and down goes their business again. Don't allow yourself to get bored with lead generation. Think of me running down my street dragging a kite and you'll keep your business flying high!

Is It Possible to Buy a New Client?

How to Use Lead Conversion % to Run Your Business

2 replies to "The Kite Story…"