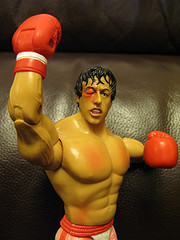 This is a guest post from the legendary Dan Kennedy. I think you’ll find it fits in perfect with the recent theme in my blog about failure. Enjoy!

Sticktoitiveness” is a strength of character, a philosophical position, a consciously valued and directed behavior, a habit. In any business category, fewer than 5% of the owners create extraordinary incomes, wealth, security and independence; 95% flounder, frustrated for life. If you spent 25 years chronicling the behavioral differences between the mediocre majority and high-achieving minority as I have, the most striking distinction you would find is this: winners stick to things, losers give up easily, flit about randomly. Losers waste all the years of their lives looking for the unicorn of modern fantasy, the easy button. Winners find winning strategies and stick to applying them.

Sylvester Stallone was rejected as an actor by every Hollywood studio. The script he wrote for Rocky was also summarily rejected by all but one – and they agreed to buy it for a flat fee; Stallone, broke at the time, refused to sell it unless he could star in the movie and receive customary compensation. He made the rounds again and again. He persisted until he finally got his way. There must be thousands of better actors and thousands of better script writers who were working as waiters then and are still working as waiters now. The difference is not talent. In my 30 years’ business experience, I’ve found talent to be the most overrated of all things, less likely to lead to success than most things.

By comparison, staying stuck like super-glue to an objective; acquiring the needed know-how at any cost; ignoring others’ criticism; refusing to take no for a permanent answer, fighting, scrapping, studying, figuring out one more piece then one more piece; these behaviors are behind the true stories of the rich and famous. Sadly, most people don’t stick. At much of anything. Their grade on life’s report card is “Incomplete”. Their home has books purchased but never read, how-to courses with the outside plastic wrap unbrokn; projects begun but never finished. Their business’ files, nooks, crannies populated with worthy ideas still-born in procrastination, strangled in disorganization. They, themselves, displays of poor discipline: intellectually uncurious, uninformed, in poor physical shape. Turns out, the rewards for good intentions are small. The rewards for unfulfilled talent just as small.

The reasons people don’t stick to anything long enough to succeed with it are many and varied. Some are psychological, revealed in a book I recommend, The New Psycho-Cybernetics, which I co-authored with Dr. Maxwell Maltz. It and the prior, original edition combined have sold more than 30-million copies worldwide. Some are circumstantial; people who permit themselves and their time to be ruled by others’ priorities, events as they occur – antidotes offered in my No B.S. Time Management For Entrepreneurs and No B.S. Guide To Ruthless Management of People And Profits books. Some are sinful, like sloth. Too many people lust for rewards without personal responsibility. Whatever the reasons for the losers’ lack of sticktoitiveness, the winners’ reality is refusal to be deterred or distracted from their objectives and aggressive pursuit of them. Successful pursuit and achievement of exceptional objectives usually involves two key elements: sticking to a course of study, acquisition of information, learning relevant methodology even if, at first, uncomfortable, foreign or difficult; sticking to self-imposed requirements for implementation of what is learned.

The WHY PEOPLE FAIL articles are provided by Dan S. Kennedy, serial entrepreneur, from-scratch multi-millionaire, speaker, consultant, coach, author of 13 books including the No B.S. series (www.NoBSBooks.com), and editor of The No B.S. Marketing Letter. WE HAVE ARRANGED A SPECIAL FREE GIFT FROM DAN FOR YOU including a 2-Month Free Membership in Glazer-Kennedy Insider’s Circle, newsletters, audio CD’s and more: for information and to register, visit: http://www.FreeGiftFrom.com/robminton