When Cornelius Vanderbilt (the Commodore) passed away in 1877, he left the majority of his fortune valued at $95,000,000 to his oldest son. In today’s dollars, this fortune would be worth around $2.1 billion. He left smaller amounts to all of his other children. This particular son, who received the majority of his fortune, actually doubled it over the next 10 years creating the largest fortune in the world at the time. Within a few short years, his children (the Commodore’s grandchildren) had spent almost all of it.

From “Fortune’s Children: The Fall of the House of Vanderbilt“…

“This fabled golden era, this special world of luxury and privilege that the Vanderbilts created, lasted but a brief moment. Within thirty years after the death of the Commodore Vanderbilt in 1877, no member of his family was among the richest people in the United States…. When 120 of the Commodore’s descendants gathered at Vanderbilt University in 1973 for the first family reunion, there was not a millionaire among them.”

The largest fortune in the world and not ONE millionaire remained in the family.

How do you blow the world’s largest fortune?

Here’s how… from Fortune’s Children:

“But nowhere is that curious combination of magnificence and absurdity that was the Gilded Age more palpable than in the great country homes that still stand today as monuments to their dreams and fantasies: Idlehour, Marble House, The Breakers, Biltmore, Florham. These country estates were not just bigger or more ornate than other millionaire’s mansions. They rivaled the most significant country houses of England and the chateaus of France that had been passed down to titled descendants, generation to generation, since the Middle Ages. They were built to become precisely the American equivalent of these Old Wold Palaces, great ancestral homes that would proclaim for centuries, for all time, the prominence of the Vanderbilts. But it did not work out that way. Far from becoming ancestral homes, these monuments to limitless wealth, built for eternity, were hardly used for a lifetime. None was occupied by the next generation.”

The grandchildren and great grandchildren of the Commodore built very large country estates. They spent millions and millions of dollars on these homes and then rarely used them. They were summer homes that were only used a few weeks each year. Today, you can tour a few of these homes. Check them out at the links in the above paragraph.

I’ve been to the Biltmore a few times. It’s breathtakingly beautiful. It’s situated on a private estate that was originally 10 square miles. It’s 178,926 square feet and cost an estimated $5 million to build. This would be $138 million in today’s dollars. I haven’t been to the other homes, but I can only imagine how incredible they are and plan on touring these homes in the future. These homes were the most expensive homes built in the country at the time and the next generation of Vanderbilts didn’t even occupy them.

The Commodore, who created the initial fortune, had the ability to set every future generation of his family up for life and completely messed it all up. There are many reasons the family blew the fortune, but the first, and probably the most important, is the Commodore was a complete ass to his children and didn’t teach them how to maintain wealth. (You know, never touch the principal. Only spend the interest) On top of this, he left the majority of his fortune to one child. This created a massive legal battle over the will that lasted almost two years. He actually picked the right child, because this particular son doubled the wealth.

The next issue was that he didn’t put any restrictions on how the money could be used.

John Jacob Astor, who created massive wealth in real estate a few years before the Commodore, setup a 50/50 trust for his wealth. This 50/50 trust split the fortune between his children and grandchildren. It also required this same split for future generations. Had the Commodore copied this approach, the family may have been forced to maintain their wealth through additional generations.

The second reason the family lost the fortune seems to have stemmed from one person, Alva Vanderbilt. Alva Vanderbilt married the grandson of the Commodore.

Soon after the wedding, Alva went to work spending the fortune. Unfortunately, the distinguished society of the time, didn’t approve of the Vanderbilt fortune because it was “new” money. The Vanderbilts were not invited to any of the balls and functions of the wealthy families of New York. This was a problem, because Alva desperately wanted to be part of the “in” crowd. So she decided to build the largest mansion in New York hoping to win their approval.

“He sensed that Alva wasn’t interested in another home. She wanted a weapon: a house she could use as a battling ram to crash through the gates of society.” 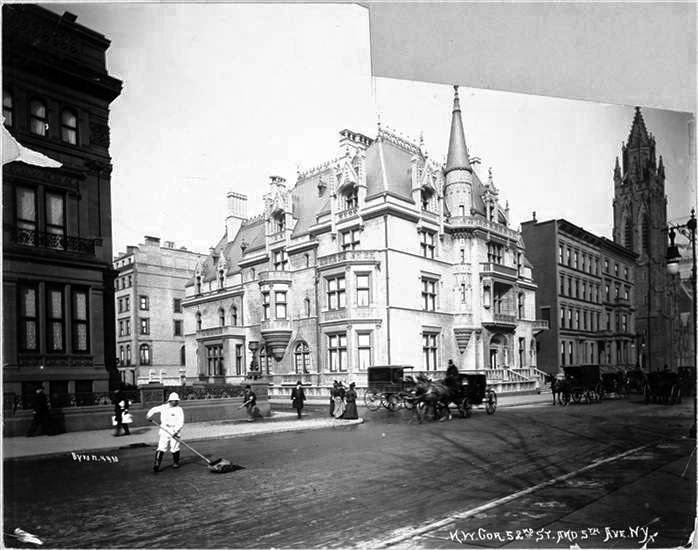 It was a masterpiece; however, the home didn’t provide the result hoped for, as the family was still left off the invite list for big Astor family annual party.

Alva decided to host her own party at her new mansion inviting over 1,000 of the richest families in New York. The one family she didn’t invite was the Astor family. Mrs. Astor didn’t want to be left out, so she ended up calling on Alva Vanderbilt. The 1st Vanderbilt party cost $250,000 ($5.8 million in today’s dollars) and this investment finally worked! She won the approval of the elite social set. (In today’s dollars, she spent $75.8 million to get accepted into the “cool” crowd.)

This social acceptance and mansion were the start of the fall, as other family members now wanted to achieve the same status. Within just five weeks of Alva Vanderbilt’s successful party, her father-in-law (the Commodore’s son) began designing his own mansion on Fifth Ave. Various family members ended up building several mansions on Fifth Ave in New York near Alva’s beautiful home. Unfortunately, these homes which cost millions to build, didn’t last long.

“Yet these homes, too failed, to become the family seats their builders had envisioned. One by one, the Vanderbilt mansions on Fifth Avenue fell to the wrecker’s ball, their contents to the auctioneer’s gavel. The first of these Fifth Ave mansions was completed in 1882, the first was demolished in 1914, and by 1947 every one had been broken to rubble.”

Alva’s spending was just getting started…

“Willie (Alva’s husband) quickly learned that the only way to humor and appease his volatile, imperious wife was to let her spend his money. Willie’s father soon made it possible for her to spend on a grand scale, the only kind of spending that could satisfy the insatiable Alva.”

From this point forward, it was a downward spiral of various family members competing to build the largest and nicest homes that were hardly ever occupied. Alva and Willie ended up getting a divorce.

It’s really crazy to stop and think about all of this. One person’s need for approval from the elite social society ended up starting the fall of the entire family. This need for approval went much deeper than just the size of the homes. It led to unhappy hand-picked marriages for various family members and more. This desire for social approval ended up completely destroying generations of the family.

The Commodore’s son who inherited the majority of the initial fortune often complained about the burden of his wealth. He would often say that massive wealth provided no advantages over moderate wealth. He said…

“I have my house, my pictures and my horses, and so do they. I can have steam yacht if I want to, but it would give me no pleasure, and I don’t care for it.” When speaking of a neighbor, he said, “He isn’t worth a hundredth part as much as I am, but he has more of the real pleasures of life than I have. His house is as comfortable as mine, even if it didn’t cost so much; his team is about as good as mine; his opera box is next to mine; his health is better than mine, and he will probably outlive me. And he can trust his friends. Being the richest person in the world brought him, he said, nothing but anxiety.”

When William Vanderbilt uttered these words, he was the richest man in the world. He was very unhappy despite having everything money could buy. He was in poor health and worried immensely about his money. He was initially going to copy his father’s estate plan by leaving the majority of his fortune to his older son, but he didn’t want to burden him with the stress and pressure. So he ended up dividing the majority of the wealth between his two sons.

The Commodore once said, “Any fool can make a fortune. It takes a man of brains to hold on to it after it’s made.”