In 2008, I read this biography on John Jacob Astor. I went on to write the following article included below about what I learned from Astor in a newsletter to all of my clients. Little did I know at the time one of the ideas I learned in this book would stay with me. The idea is “self-financing” investments and I actually use this concept with every investment I make today. So I thought I would share what I wrote years ago and the concept of self-financing investments with you!

(This is a 7:42 minute video. Fast forward to around the 5:00 mark and you’ll hear about the perpetual money machine Astor had created.)

Astor, the shrewd businessman that he was, began using the profits from his fur business to acquire real estate. He realized New York was growing quickly and he could make more money buying land than selling furs. He invested into the demand for real estate and ultimately built a substantial real estate empire.

When Astor first started investing in real estate, he would acquire land and then re-sell the land when the sale offered a profit. However, Astor made a significant change in his real estate investing philosophy when he acquired a long term (62 years) Trinity leasehold for $62,500. This lease included Richmond Hill, a 465-acre piece of property. He began to sub-divide this land and leased out parcels separately. In 1806, his ledgers documented $10,000 of rental income from this land. In the same year, he had made $180,000 selling property outright. His initial returns selling land were 18 times larger than his income from leases, however, Astor realized that his income from leasing could be increased significantly.

With his shift to investing for long-term appreciation came dramatic increases in his rental income. By 1830, his real estate rental income amounted to $46,000 a year. His investments became “self financing.” Income from leases went into acquiring more property.

Astor invested $224,000 in Manhattan real estate at the bottom of the 1837 financial crash. Many people believed the market would never recover and regarded him as mad for throwing his capital into a “bottomless pit.” When interest rates climbed to 7 percent and owners with properties mortgaged to the Astors could no longer service their debt, Astor foreclosed on 70 properties. For $2,000 Actor acquired a section of Harlem said to be worth $1 million. By 1840, his leases brought in $128,000 annually. Eight years later, his rent from 470 leases topped $200,000 a year.

At Astor’s death, his son William Astor took control of his father’s real estate investments. By the time of William’s death, the Astor family owned land under more than 700 buildings and houses, many of them crammed with poor tenants. William spent no money on himself. Rich men of the time delighted in carriages and fine horses, but William walked everywhere, never wasted money on wine, scanned and revised the smallest expenditure. He pursued city plans and spent hours studying his rent rolls. He knew every inch of real estate that stood in his name. He knew what was due when the leases expired and attended personally to the matter.

Astor had been able to keep the fortune in the family longer than any other wealthy family because of a special generation-skipping trust he created. He gave half of his fortune to his grandchildren. His children were required to give half of their fortunes to their grandchildren. This process continued until 1959, when one of the last Astor’s broke the ironclad family rule and donated his money to a charitable trust.

Here are a few lessons from Mr. Astor:

1. Invest profits from your business (or paycheck) into real estate.
2. Study population trends and invest into demand.
3. Buy real estate during market crashes to lock in desirable properties at attractive prices.
4. Invest for rental income and long-term appreciation.
5. Perpetuate your family wealth using generation skipping trusts. (Give half to children and half to grandchildren)
6. Teach your children to live below their means.

There were two very important sentences we should consider further. These two sentences are:

His investments became “self financing.” Income from leases went into acquiring more property.

What does self-financing really mean with regard to investing?

1) Investments that pay for themselves from income generated by the investment.

STOCKS: For the most part, stocks are not-self financing because they do not regularly pay income to the investor. Only stocks that regularly pay dividends would fit our description as self-financing. Doing some quick Internet research (back in 2008), I found approximately 200 stocks paying monthly dividends. Only these 200 stocks might be considered self-financing out of the thousands of stocks available.

MUTUAL FUNDS: In most cases, these investments are not self-financing. They do not regularly pay income to their shareholders. Yes, some do but most don’t.

LENDING MONEY: Loaning money to others would be self-financing if your borrower paid interest each month. The interest income you received could be used to loan additional funds to other borrowers. Lending money is risky if you don’t acquire some form of protection, such as a lien, on their property. However, with this higher risk, you’ll find higher rates of return. The other downside to lending money is the lack of investment appreciation. Throughout the loan payment period, your profits are tapped out at the interest rate charged.

REAL ESTATE (HELD FOR RENT): Now, I’m obviously biased on this investment choice. But real estate is one of the best self-financing investments you can make. This is because it pays for itself and, in many cases, it provides additional income which can be used to purchase additional investments.

MOBILE HOMES: Buying and reselling mobile homes with owner financing is another excellent self- financing investment. This, in my humble opinion, is even better than loaning money to others because you get to profit from appreciation. In many cases, you can sell the mobile home for double what you pay for it. You then get to collect attractive interest rates on this higher sale price.

YOUR OWN BUSINESS: A business you own can also be a very good self-financing investment. I’m obviously assuming that your business is generating monthly income. For most people, they launch “side” businesses in their spare time. These side businesses usually pay for themselves and then provide extra income for the owner. If your business was launched from your home, you don’t usually incur significant start-up costs. Most of the income from the business can be used to invest into additional self-financing investments. Another potential benefit of starting your own business is you might be able to sell your business at some point down the road. This means you should be able to profit from the appreciation in the value of the business. 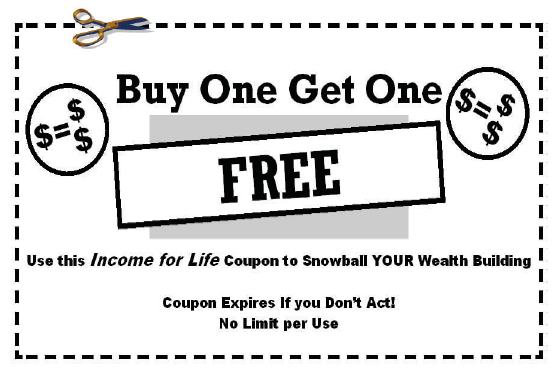 I guess the questions we should all consider before making ANY investment is:

If we don’t acquire self-financing investments, we might find ourselves saving for years without any significant progress.

Why I Decided Not to Invest into Dividend Stocks

Why I Decided Not to Invest into Dividend Stocks

A $2,500 Investment Property? … And a lesson learned on return on investment

A $2,500 Investment Property? … And a lesson learned on return on investment