When I was working my arse off to become a multi-millionaire, I built several businesses with many employees. Finding, training and keeping good employees was a constant challenge then as it is today.

Things got so bad that I ended up hiring two or three people for one position knowing in advance that one or two wouldn’t perform as expected. I simply hired extra people and trained them at the same time hoping one would be a rock star. Instead of hiring one sales agent for my team, I hired three. Instead of hiring one full-time administrative assistant, I hired two part-time assistants. If each person I hired ended up performing well, I would simply create a new opportunity for them.

And because I went through so many employees as the businesses grew, I ended up having to replace the key locks to our building with combination push-button locks. This change saved a lot of time when we parted ways with an under performing employee, or sales agent. Instead of replacing the lock when someone left, we just changed the combination. 🙂

Each time this happened, I’d send a voice message to everyone with the new lock combination. This voicemail always meant that someone left the team and it seemed to happen every month. 🙁

Truth be told, one of the main reasons I’m no longer interested in building a large company is because I don’t want to have to deal with employees. The 80/20 rule applies to employees, as it does to everything else. 20% of employees rock and roll while 80% fail to meet expectations. The 80% who don’t meet expectations cost massive amounts of money in terms of lost revenue and lost time for you and your business.

Today, my only employee is MONEY. 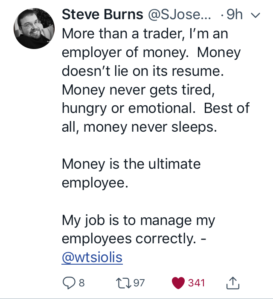 And if you’re a good employer of your money, it WILL work very hard for you. It will work 7 days a week, 24 hours a day. In fact, it will work for you while you’re sleeping and traveling, too.

Sadly, we aren’t taught how to employ money.

We’re not taught how to make money work very hard. Instead, we’re taught to work hard for money.

You can become a member here:
https://dividendrealestate.com/membershipspecial/

When you do, you’ll instantly receive the November issue and all of the special bonuses.

The 11 Rules of the Ideal Lifestyle Business

The 11 Rules of the Ideal Lifestyle Business

Would You Retire Early? (Plus 3 Commonalities of Early Retirees)

Would You Retire Early? (Plus 3 Commonalities of Early Retirees)