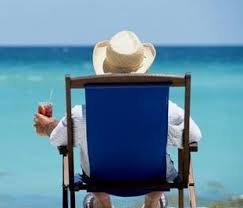 Several years ago, I began studying people who retired early. I became fascinated by people who walked away from the pursuit of wealth and success. I couldn’t understand why someone with unlimited opportunity would simply turn their back and let it go.

Think about it… if you had the skills and resources to build a large profitable business, or to climb the corporate ladder with ease, would you walk away to retire early if you could?

I’ve honestly been struggling with this myself for several years and have come to realize that most people who walk away from opportunity do so because they no longer see value in the opportunity. Why pursue something you no longer want?

Because more money, success, or accomplishment will not make them any happier. In fact, chasing more of something that doesn’t bring happiness may actually lead to a great deal of unhappiness.

This is a very big shift in thinking and it IS the main commonality among people who decide to walk away and retire early. ALL early retirees value their time above money, success and accomplishment. They truly understand how short life is and decide to stop trading away something of priceless value (our time) for something of lower value (money, success, and accomplishment).

The third commonality among many of the early retirees I’ve studied is that they retired with significantly less than $1,000,000 saved.  In most cases, they retire early with $500,000 to $600,000 in savings. This was an eye-opener for me, because most financial planners recommend saving significantly more before retiring. Turns out, their financial plans were designed for their benefit, not ours. You definitely don’t need 7 figures to retire early.

When someone starts to think about retiring early, they’ll typically stumble upon people who retire early by living extremely frugal lifestyles. These early retirees cut their expenses to the “bare bones” and this is how they’re able to retire early. Examples of these frugal early retirees are Mr. Money Mustache, and Early Retirement Extreme.

I wanted to retire early while expanding my lifestyle. I wanted to allow my kids to go to the schools they wanted to attend. I wanted to enjoy several family vacations each year. I wanted to go out to dinner and enjoy this time with my family. I wanted to have my cake and eat it, too. I like cake (and ice cream). You really can’t have cake without ice cream.

One thing led to another and I ended up re-reading several of Robert Kiyosaki’s books. Kiyosaki’s plan for early retirement is different than the plan followed by frugal early retirees. His plan calls for retiring early without having to live frugally.  In other words, retire from paid work as soon as you can and then use your free time to create more passive income. This new passive income compounds overtime allowing you to expand your lifestyle.

How to employ money

How to employ money

How do you live a good life?

How do you live a good life?