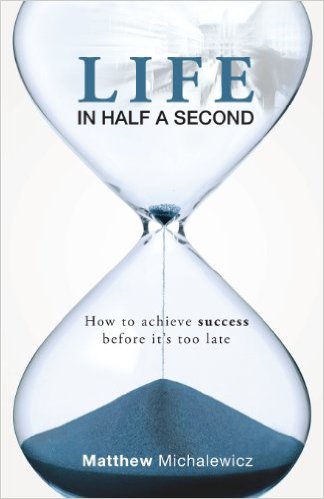 You’ve got to read “Life in Half a Second: How to Achieve Success Before It’s Too Late!” by Matthew Michalewicz.

It’s an awesome book and it will definitely make you think. The author shares a story about when he was working at minimum wage for Target while in college:

“Each weekend, I showed up for work in my red shirt and khaki pants, ready to exchange 20 hours of my life for $85. I knew that “time is money”, but while working at Target, I realized that money was more than just time: money was life.

When I bought something for $85, I was spending 20 hours of my life – 20 hours of standing behind a cash register, waiting on people, with stiff legs, aching back, bored, uncomfortable, dejected 20 hours I could never get back. What I bought might have been worth $85, but was it worth 20 hours of my life?”

This is such an amazing lesson for us to learn. Sadly, some never learn it. 🙁

My 12 year old daughter seems to have recently learned this. She didn’t have any money and wanted to buy something. I gave her a list of jobs she could do to earn the money. One of the jobs was to wash and vacuum our cars. Things started off great as she enjoyed the sun washing the exterior of the first car. However, when she started vacuuming the inside and she started to sweat a little, I heard her say, “This isn’t worth it.”

I tried to hide my smile.

What isn’t worth it I wondered? The money, or the thing she wanted to buy? I could see her thinking through how much time she had to work in order to earn the money she wanted and evaluating the options. She finally asked, “If I stop now, how much have I earned?” I replied, “You haven’t earned anything. You didn’t finish the job!” She huffed, “That’s not fair”, which presented a great teaching moment that I used to my advantage.

Long story (and some drama) short, she finished the job and earned the money she wanted. However, she didn’t spend the money. She saved it! Yes, I’m a proud father! Now I have the opportunity to show her how to invest it to earn more money!

Michalewicz went on to share a story that changed his life and showed him the path to financial success.

“I read self-help books; I knew all about saving $287 a month for 40 years to become a millionaire. I was aware of the wide, flat road, the safe one, the one everybody took, the one most people dropped dead on before reaching the end. That road wasn’t for me. My impatience flared….”

Soon after this he was at the gym working out when the owner of the gym asked how he was doing. For some reason, he happened to share his frustration over his financial situation and his limited options after college. The gym owner replied:

“I don’t know what they’re teaching you in college these days, but let me tell you one thing. You’ll never become wealthy unless you own something. I don’t care what – a business, real estate, scientific invention, even a song or painting – buy you need to own it. They only way you will ever become wealthy is by being an owner, not a worker. You’ll never get wealthy being a worker. Never.”

The answer to financial success in just a few sentences.

The Incredible Lifestyle of Judge Judy

The Incredible Lifestyle of Judge Judy

Money Master (How to win the game)

Money Master (How to win the game)

Taking The Easy Way Out

Taking The Easy Way Out