When was the last time you toured an art museum? Odd question, I know.

The reason I’m asking is because I’ve become a big art fan over the last few years. This appreciation all started during a fun family night out. We went to dinner and then spent the rest of the night touring the Cleveland Museum of Art. I was blown away. Seriously, in awe of what artists had created throughout history. One of my favorites from the Cleveland Museum of Art is this one:

This is “The Education of the Virgin” by Giuseppe Mazzouli the Elder and it’s believed to have been made in the 1700s. I know it’s hard to tell from the picture, but this sculpture seems to come alive from the wall. I couldn’t pry myself away from it. It is simply amazing. I honestly think I could spend an entire day studying this treasure.

Instead, they used chisels, mallets, and sandpaper. From Wikipedia:

The work begins with a clearly defined model to be copied in stone. Frequently the sculptor would begin by forming a model in clay or wax, and then copying this in stone by measuring with calipers or a pointing machine. When he or she is ready to carve, the carver usually begins by knocking off, or “pitching”, large portions of unwanted stone. For this task he may select a point chisel, which is a long, hefty piece of steel with a point at one end and a broad striking surface at the other…

The carver places the point of the chisel or the edge of the pitching tool against a selected part of the stone, then swings the mallet at it with a controlled stroke. He must be careful to strike the end of the tool accurately; the smallest miscalculation can damage the stone, not to mention the sculptor’s hand. When the mallet connects to the tool, energy is transferred along the tool, shattering the stone. Most sculptors work rhythmically, turning the tool with each blow so that the stone is removed quickly and evenly. This is the “roughing out” stage of the sculpting process.

Once the general shape of the statue has been determined, the sculptor uses other tools to refine the figure. A toothed chisel or claw chisel has multiple gouging surfaces which create parallel lines in the stone. These tools are generally used to add texture to the figure.

Eventually the sculptor has changed the stone from a rough block into the general shape of the finished statue. Tools called rasps and rifflers are then used to enhance the shape into its final form. A rasp is a flat, steel tool with a coarse surface. The sculptor uses broad, sweeping strokes to remove excess stone as small chips or dust. The final stage of the carving process is polishing. Sandpaper can be used as a first step in the polishing process, or sand cloth.

Why am I writing about this you might wonder?

Well, think about the dedication Mr. Mazzouli must have had to work on this sculpture? How many years did it take him from start to finish? How many times did he get frustrated and want to quit? How many mistakes did he have to fix? What did he have to sacrifice to make this?

I don’t know if we would have the ability to recreate this same sculpture today without the resources we now have available. I don’t think people have the same focus or level of commitment today. We’re too worried about what’s new on Facebook, or Instgram. We’ve got to check our emails and stay on top of the news.  We’re always looking for the easiest and fastest way to get what we want.

I often write about building a business providing attractive monthly cashflow. A business you can run in just a few hours a week, so you’ll have more time to do the things you’ll want to do in life.

The problem is creating anything of real value (business, investment portfolio, art, book, website, etc.) takes time and commitment. You can’t build a portfolio of income properties without a vision and dedication. The end result may be a cool lifestyle business, but the journey to build it requires effort and perseverance.

When I owned my gym, I wrote about  this statue of “David” by Michelangelo: 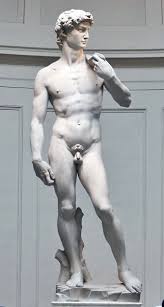 Michelangelo said this sculpture was to free the human form that was trapped inside the block of marble.

…  the block of marble remained neglected for 25 years, all the while exposed to the elements in the yard of the cathedral workshop. This was of great concern to the Opera authorities, as such a large piece of marble not only was costly but represented a large amount of labour and difficulty in its transportation to Florence. In 1500, an inventory of the cathedral workshops described the piece as “a certain figure of marble called David, badly blocked out and supine.”[6] A year later, documents showed that the Operai were determined to find an artist who could take this large piece of marble and turn it into a finished work of art. They ordered the block of stone, which they called The Giant, “raised on its feet” so that a master experienced in this kind of work might examine it and express an opinion.

Though Leonardo da Vinci and others were consulted, it was Michelangelo, only 26 years old, who convinced the Operai that he deserved the commission. On 16 August 1501, Michelangelo was given the official contract to undertake this challenging new task.[7] He began carving the statue early in the morning on 13 September, a month after he was awarded the contract. He would work on the massive statue for more than two years.

It took Michelangelo over two years to transform a large block of marble into a masterpiece. Two years to free the human form held captive inside the block of marble. He used vision, commitment, patience and incredible persistence to complete this dramatic transformation.

Sadly, we seem to have lost most of these four skills today.

We (and this certainly includes me) all want everything yesterday. We don’t have a vision for our lives. We’re not committed to creating this vision. We give up very easily when things go wrong.

Your life is a large block of marble and you have the opportunity to sculpt whatever you want.

Or let’s think about fat loss for minute. Your body is a block of marble and you have the opportunity sculpt it anyway you want. Are you going to create a masterpiece? You most certainly can and the good news is… you don’t need a hammer and chisel.

What you do need is…

1. A vision of what you’re going to create.
2. An action plan to follow that will give you the results you desire.
3. The commitment to stick to your plan until you’ve completed your masterpiece.

The fat billionaire next door

The fat billionaire next door

The Fat Burning Day? A simple plan you can use to accelerate fat loss

The Fat Burning Day? A simple plan you can use to accelerate fat loss