We recently celebrated my daughters 18th birthday. Part of our celebration included going out to dinner with a large group of her friends. When the time for dessert rolled around, one of her friends passed because she had given up sweets for Lent. When asked about it, she said…

“If Jesus can die on the cross and suffer such pain, I can give up sweets for a few weeks.”

I’m not very religious, but her insightful comment quickly shifted my perspective on many things.

Earlier this same day, a friend who battled cancer for 7 years passed away. He was only 46. 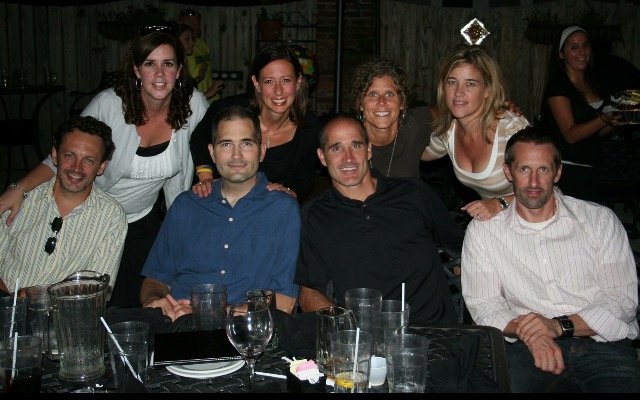 (Our friend, Mark Zuzek, is pictured in the first row next to me. He is second from the left.)

When Mark was 39 he was diagnosed with stage four lung cancer. At the time of diagnosis, Mark’s cancer had actually spread into his brain. The crazy part is Mark never smoked and was a pretty healthy guy. He exercised and did everything you would normally do to live a long life.

Mark’s father passed away at the age of 41 from a heart attack. So as a precaution Mark had annual physicals. He was at high risk for heart problems due to his family history. Mark had two young children and wanted to be there for them as they grew up. He was overly cautious with his health. It was at one of these checkups that they found the cancer.

If you don’t know, the statistics for stage four lung cancer are not good. More than half of the people with lung cancer die within one year of being diagnosed. Only around 17% live beyond five years. My mother passed away just 5 months after the same diagnosis.

Because of Mark’s age, he was able to have access to several experimental treatments. These treatments extended his life significantly.

At his funeral, my wife was talking to Mark’s mother-in law and shared my mother’s cancer story. Mark’s mother-in-law replied, “Her passing so quickly was a blessing.” She said this because they were with Mark and his family for his 7 year battle.

Her comment really made me think about the battle anyone with cancer faces. My mother fought the exact same battle.

I have no clue what someone with cancer really deals with, but I have to think they deal with the following challenges:

Pain and discomfort – Someone with cancer is in a lot of pain. This pain impacts a great deal of what they do physically. My mother ended up with severe COPD and struggled for every breath. This pain is with them on a daily basis.

Mental anguish – Imagine waking up each morning knowing you have cancer and that you may not live very long. Cancer could potentially take over many of your daily experiences, as thoughts of what’s going to happen flow through your head. Can you beat it? What will you miss out on if you don’t? What will your family do? How sick will treatment make you? How are you going to pay for all of the medical expenses? Are you becoming a burden on your family?

Physical declines – Because of the treatments, you will not have the same physical capabilities. You probably won’t be able to do the same things you would normally be able to do. This also might include hair loss and other side effects from treatment.

Mark and anyone else fighting cancer are warriors. They really are.

I started this post with the comment my daughter’s friend made about giving up sweets. “If Jesus can die on the cross and suffer such pain, I can give up sweets for a few weeks.” These words instantly brought me to Mark’s battle.

If Mark can fight stage four cancer for 7 years, I need to be able to handle ANY and EVERY challenge that comes my way. In fact, something you and I may consider a challenge isn’t anything compared to what people battling cancer face. Our challenges are nothing. They are so trivial that there is zero comparison.

Think about some of the things we “struggle” with…

– It’s hard to stick to my diet.
– It’s hard to lose weight.
– I don’t want to go workout today.
– My kid didn’t make the travel team/national team.
– I have a problem at work.
– I don’t have enough money.

If you have your health, you’re one very lucky person. Since Mark’s passing, I carry this in my wallet:

You can probably see the fold in the middle. I keep it loose in the middle of the wallet so I see it every time I open it. I carry this because I want to remember Mark. I also carry this because I want to remember the 7-year battle he fought. I want to keep things in the proper perspective. My problems are NOT problems. I want to try and remember to not take anything for granted. Thinking about Mark and other people battling cancer puts everything into perspective very quickly.

Back in 2009, I interviewed Mark about his thoughts on his diagnosis. I’ve included the recording of this interview below. I’ve done hundreds of interviews, but this was probably the hardest one. I can still hear my voice cracking a little in the recording. This interview was actually recorded just a few months before my mother was diagnosed with stage-four lung cancer. Mark was very helpful and answered dozens of questions about her treatment.

Here’s the interview with Mark:

I also suggesting watching the documentary, “Be Here Now” on Netflix.

Andy was actually one year younger than Mark. He had two beautiful children. He lost his battle in 2011.

There is tremendous sadness in watching this battle.

However, it’s important for many reasons. Mainly, because it gives perspective on our own lives. It helps us see things more clearly.

It helps us remember what is really important in life.

NOTE: There have been some promising new treatments for cancer. I wish these treatments were available for Mark and for my mother. The good news this treatment is available now for anyone who is fighting this battle. Please check out this new treatment here: http://articles.mercola.com/sites/articles/archive/2017/03/19/metabolically-supported-therapies-cancer-treatment.aspx

Kick it for cancer? (another text from my daughter)

Kick it for cancer? (another text from my daughter)

Pet Nutrition – The Cancer Epidemic in Dogs (How to Possibly Prevent with Your Pet!)

Pet Nutrition – The Cancer Epidemic in Dogs (How to Possibly Prevent with Your Pet!)

How to Prevent Cancer Through The Foods You Eat

How to Prevent Cancer Through The Foods You Eat

“I would give anything to be healthy for just one day…”

“I would give anything to be healthy for just one day…”