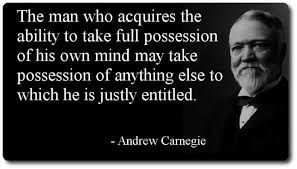 How much of your life do you want to sell?

This is an interesting question few ask of themselves. Day in and day out, we hurry out the door in the morning to sell another day of our lives. And worse, as time passes we seem to sell more and more of our time. I certainly did trying to build multiple businesses at the same time.

This all changed in 2007 when I read David Nasaw’s biography on Andrew Carnegie. This book has had more influence on me than any other book I’ve read, including all of my research on Warren Buffett. From the biography:

“In December 1868, (Carnegie) he tallied his current assets and income and then wrote himself a memo. His net worth, he discovered, was about $400,000 (close to $75 million today); his annual income in dividends over $50,000. If he carefully managed his assets over the next two years… he would, he estimated, be able to guarantee this level of income in the future.”

“He resolved: “Beyond this never earn – make no effort to increase fortune, but spend the surplus each year for benevolent purposes. Cast aside business forever except for others.” He had already scarified too much to the pursuit of wealth. Until now, his “idol” had been “amassing of wealth,” which was, he recognized, “one of the worst species of idolatry. No idol more debasing than the worship of money.”

Up until this point in time, Carnegie focused exclusively on money and wealth accumulation. He realized he didn’t want to spend the rest of his life “making stock deals and chasing bridge contracts.” He was ready now to put aside moneymaking and choose a way of life designed for self improvement. His plan was to only work a few hours each morning. He would then spend his afternoons reading systematically.

Oddly enough, he didn’t follow through with his plan until 1871, three years later. In 1871, he took a long business trip. Business issues and market instability prevented him from working much. This situation created a forced extended vacation where he tasted the fruits of semi-retirement and found them quite exhilarating. Although he had not celebrated his 37th birthday, Carnegie would never again return to a full-time work schedule.

Shortly after this extended vacation, a Pennsylvania businessman mentioned to Carnegie that he was always sure to be in his office by “seven in the morning.” Carnegie remarked laughingly:
You must be a lazy man if it takes you ten hours to do a day’s work.’ What I do,’ he said, is to get good men, and I never give them orders. My directions seldom go beyond suggestions. Here in the morning I get reports from them. Within an hour I have disposed of everything, sent out all of my suggestions, the day’s work is done, and I am ready to go out and enjoy myself.”

“What was most remarkable about Carnegie’s newfound success as a capitalist was how little it required of him. At each stage of his business career, he had worked less and earned more…. since entering a state of semi-retirement, his income had increased exponentially. Carnegie had no delusions at all about the virtues of hard work. He took pride in his own rather idiosyncratic work habits. He had become an absentee landlord.”

In various parts of the book, Carnegie’s lifestyle was highlighted:

“Carnegie, the good-natured paterfamilias (head of family), organized amusements, took family and friends for horseback or carriage rides, hunting, fishing, and after dinner at Mountain House, chose, rehearsed, directed,and starred in the evening’s amateur theatrical, led his guests in songs and storytelling, or organized rounds of whist.”

I don’t know what a “round of whist” is but this sure as hell sounds like a pretty cool way to live. I decided to copy Carnegie even though I can’t sing a note.

Carnegie owned one of the largest businesses in the world and designed it as a “lifestyle” business. In his 30s he realized his personal enjoyment was more valuable than money. He continued to make a great deal of money working only a few hours each week. This illustrates you don’t have to sell the majority of your life for money. You can create a “lifestyle” business designed around how you want to live.

What’s completely crazy is that Warren Buffett seems to have copied Carnegie’s entire business plan on every level. Carnegie was one of the wealthiest men in the world and ended up donating his fortune to build libraries around the world. Buffett has done the exact same thing. He has pledged his fortune to charitable causes. Buffett doesn’t manage any of the businesses he owns. Instead he surrounds himself with great people and he allows them to run the businesses on their own without his involvement. He spends his time buying new businesses, reading, playing bridge and hanging out with friends.

2 replies to "Andrew Carnegie Worked ONE Hour a Day"