The Urban Institute and the Housing Finance Policy Center, think tank-type non-profit that focus on housing policy issues, released a lengthy report two years ago. The report is titled, “Headship and Homeownership” and it looks at, in-depth, household formation and homeownership. Even though it’s a little dated, the findings are still 100% relevant.

One of the conclusions of this report is that the homeownership rate will continue to decline over the years in large part because the new households being formed are not in demographics typically associated with high ownership rates. Here is the complete list of the report’s conclusions:

1. Household growth can be expected to be reasonably robust between 2010 and 2020 as the millennials form households. This growth will taper off between 2020 and 2030 as attrition of older households grows.

3. The number of households headed by someone age 65 or older will expand dramatically: by over 9 million house holds in this decade and 10.5 million in the 2020s.

5. The homeownership rate will decline from 65.1 percent in 2010 to 61.3 percent in 2030. This fall results from a combination of secular declines in homeownership for people of most racial and age groups; those declines are a result of later age at first marriage and hence childbearing, stagnation of real incomes, changes in attitudes toward homeownership, student loan debt for those who do not finish college, tight credit, and the lasting impact of the Great Recession.6. Compositional changes do not explain away the decline; the drop in homeownership from increasingly nonwhite household formation is offset by changes in age cohorts—in particular, the large group of millennials moving into homeownership.

One of the biggest takeaways from reading the report is that rentals will continue to be in high demand. The reasons why are kind of touched upon above, but the key ones are:
1. The groups that will have the biggest growth in new household formation are more traditionally renters.
2. Those moving into traditional home-buying age face challenges with affordability – such as student loan debt and stagnant wages.
3. Those who can afford homeownership at the prime homeownership age are increasingly more likely to stay renters. You can kind of get your head going around in circles when combing through a report like this, but hopefully the above list of conclusions can give you some idea of possible opportunities in the market. If nothing else it can give you some idea of who the new homeowner candidates are likely to be.
It also shows you that the demand for rentals will continue to be sky-high. This means that for agents and investors, there will be profitable opportunities in:
1. Working with investors – Find, evaluate, acquire income real estate.
2. Tenant Placement – helping investors lease vacant units. (Advertising, showing, screening tenants)
3. Property management (one of the best businesses in the world… recurring monthly income, zero risk, no debt, recession proof)

Aside from demand from renters, there’s another market opportunity that has to do with the Millennials.

We keep hearing all these things about them – they don’t want to buy; they do want to buy’; they want to live in the city; they can’t afford a home because of student loans, etc. But checkout this graphic from the Urban Institute’s report: 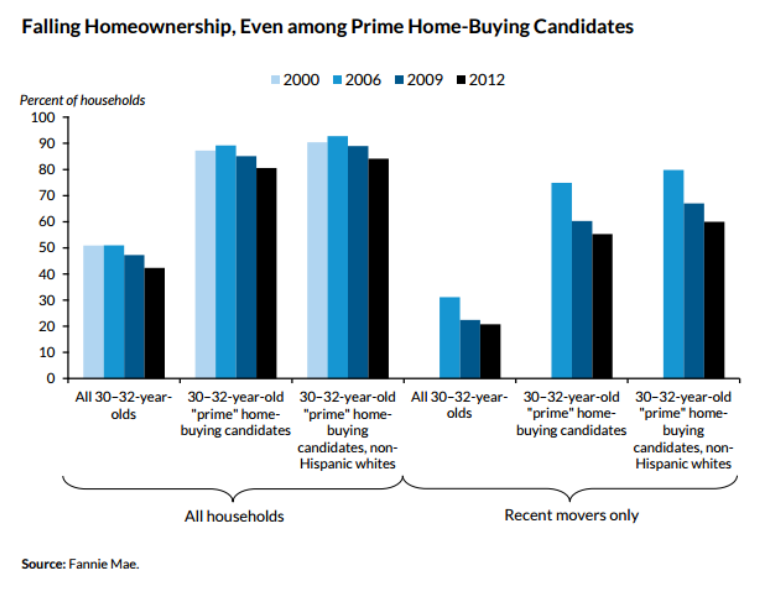 This graph attempts to illustrate the attitudes toward homeownership by those considered “prime” candidates for it. Look at the big disparities for the recent movers. Here’s what the report said:

“Declining interest in becoming homeowners. When a recent Fannie Mae study attempted to identify the young people most likely to become homeowners—“prime” candidates—it found a marked drop in homeownership in this group. These prime candidates are 30 to 32 years old and married, have at least one child in the house, and earn at least $95,000. Even for this group, after controlling for race and ethnicity, the homeownership rate declined from 87.3 percent in 2000 to 80.6 percent in 2012 (figure 25).”

What this says is that those who are typical first-time buyers, AND who can afford it, are not taking on homeownership. If there’s a declining interest in buying a home with this particular group, then there are possible marketing opportunities. One is, as written above, serving the rental needs of this demographic. Another might be to market to them with the goal of changing their attitudes toward homeownership.

If you think about it, this has always been a marketing issue for real estate agents – do you market to those who WANT to buy homes even if they’re currently unqualified, or do you target the qualified buyers whose minds you might have to change?

As an example, if you work with first time buyers as a real estate agent, you’re going to have some problems. You’ll need to adjust your marketing campaigns to attract prospects who might be more inclined to want to buy based on the findings of this report, or you’ll need to try and change the minds of those Millennials who don’t want to buy. Either way, you’ll need to take action going forward.

Or another option would be to choose a different niche where the future trends are more favorable and create marketing and investment opportunities into demand.

One thing is for sure, ignoring these changes will eventually hurt your business. It’s best to take action now and build your business into demand.

The Student Loan Crisis – (MUST READ IF YOU HAVE CHILDREN)

The Student Loan Crisis – (MUST READ IF YOU HAVE CHILDREN)