This year, my wife and I have felt a little helpless watching the various disasters destroy thousands of homes and lives.  We have donated money, but haven’t felt like we could roll up our sleeves and help them rebuild because we’re thousands of miles away.

We finally realized we could do more locally. We don’t have to help people somewhere else. We can actually help people right here in Ohio. (Yes, I should have come to this conclusion a lot faster.)

So we signed up to volunteer for Meals On Wheels. This group delivers a hot lunch to thousands of senior citizens in our area. For some, it’s there only hot meal of the day. 🙁

How could this be?

How could younger seniors be in worse health than older seniors?

A few days later, I found this article on Bloomberg by Ben Steverman. I used the headline from the Bloomberg article as my title to this post. Here’s what Ben wrote:

“The U. S. retirement age is rising, as the government pushes it higher and workers stay in careers longer. But lifespans aren’t necessarily extending to offer equal time on the beach.”

Why are Americans working longer you might wonder? Well, retirees today cannot receive Social Security benefits until the age of 67. They are working longer, because they don’t have a choice. They do not have enough saved for retirement to retire before Social Security starts providing benefits. And if I were a betting man, I would bet the benefit distribution age will actually be pushed back to 70 at some point in the near future, because Social Security is significantly under funded.

This is sad enough, but it actually gets A LOT worse.

“Americans in their late 50s already have more serious health problems than people at the same ages did 10 to 15 years ago, according to the journal of Health Affairs.” 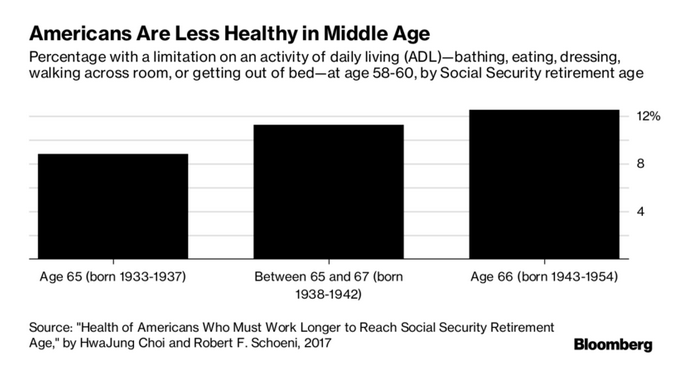 These findings seem to mirror what we found during our Meals on Wheels orientation. Those born between 1943 and 1954 are not nearly as has healthy as those born before 1937. A University of Michigan survey of seniors found:

1. A quarter of those between the age of 58 and 60 rated themselves in “poor” to “fair” health. (25% are in poor health based on their own assessments.)

2. Cognitive skills are decreasing at an alarming rate. For those with a retirement age of 66, 11 percent already have some kind of dementia or other cognitive decline.

The Bloomberg article points to several causes including obesity, drug abuse, alcohol abuse and cardiovascular disease. We obviously have an obesity epidemic and the effects of this situation are starting to be seen in our seniors.

I just wonder what this might mean for us.

Will we be less healthy then they are? Probably.
Will we be able to retire before our health declines? Probably not.

The crazy part is ALL of this IS preventable.

We can save more for retirement. We can exercise. We can reduce our carbs and lose fat. We can take better care of our selves.

This means the majority of us will NOT be able to enjoy our retirements.

The truth is… we won’t actually be able to retire and if we’re one of the lucky ones to retire, we’ll be too sick to enjoy it.