As you know, one of the things that any business should test and track the heck out of is email data. In our weekly Master Marketer reports, I try to share my own observations and numbers regarding email, but the truth is that the only 100-PERCENT relevant data about email marketing is YOUR OWN data based on your relationship with your database!

That said, it’s  useful to study others’ email findings for a couple of different reasons:

1. Other possible trends can give you a starting point for testing your own emails. For example, if a survey shows that a certain number of words in subject lines get better open rates, you can run your own tests using those words instead of guessing for your own words.

2. To be perfectly honest, many marketeers simply WON’T test and track their own emails, so they might as well just use what seems to be working for others. It’s not ideal, but hey, it’s something.

I recently read that what’s become kind of widely accepted as the most opened email subject line of all time was simply “Hey,” used by the Barack Obama presidential campaign in 2012. If you’re not really into tracking, but still have an important email to get across, maybe you could try that.

Except it probably won’t work for you. No offense, but you’re not Barak Obama. You’re not running for president. The fact of the matter is that, according to email tracking corporation Yesware, subject lines containing the word “hey” had lower open and reply rates than other common subject line words.

That’s why you should test and track what works and doesn’t in your own business!

Yesaware recently published a study of findings from 500,000 sales-related emails in this year’s first-quarter, sent by more than 1,000 different sales or marketing professionals. The biggest takeaway might have been, as the report says, “There’s not such thing as a silver-bullet subject line. The best way to understand what makes some email subject lines more or less effective is to study what works for others and then try it for ourselves.”

Since Obama’s “hey” has become known, one of the more generally accepted rules for email marketing has been that shorter subject lines are better. According to Yesware’s study, however, that’s a myth. No one word count performs any better than any other. Which, again, goes to show you that it depends on individual circumstances and particular companies and their audiences.

Still, it might be helpful to look at this info-graphic from the Yesware study: 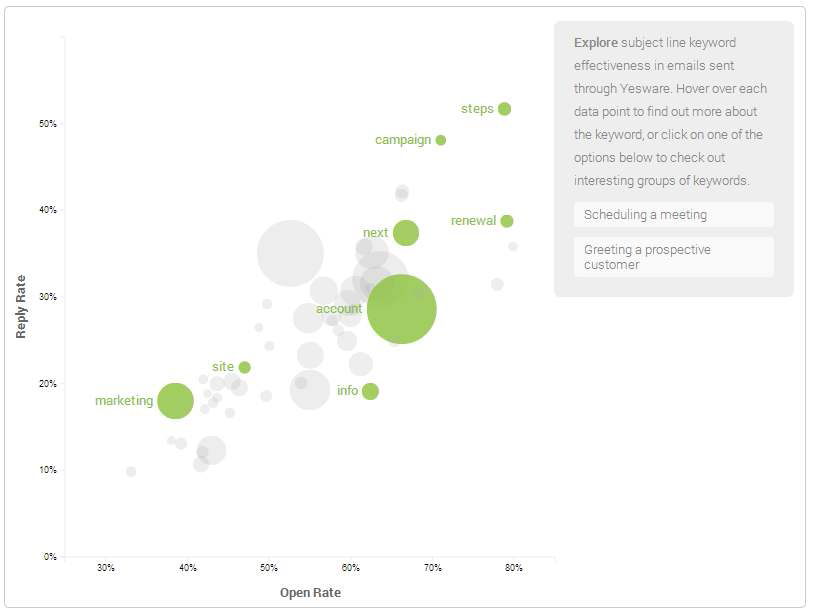 This is a set of data points that shows open rates cross-referenced with reply rates, which isn’t data you see very often. It’s possible that the combination of these two rates can give you a little more insight than just open rates – the receiver not only opened the email but was compelled to respond.

As you can see, the top performers here were: “steps,” “renewal,” “campaign,” “next,” “account” and “info.” I’m sharing this info with you because it could be useful in choosing steps you might take in your next email campaign (you see what I did there?).

The point is, these are words you could probably easily test in an auto-responder sequence. For example, you could easily use something like “The info you requested” as the subject line in the first auto-response for a free report request. You could try things like “Here’s what’s next” and “Steps to take” in follow-up emails that try to convert the lead into an appointment. Along those lines, here are some other possibly helpful findings from the same info-graphic: 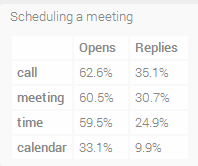 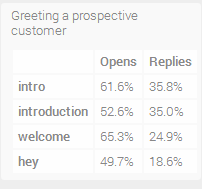 I’ve included these keywords because greetings and meetings are common topic/purposes of auto-responder sequences. For example, you can see that “welcome” in the subject line has a higher open rate than “into” or “introduction,” but both of those have a higher reply rate.

At the other end of a possible conversion funnel, “call” or “meeting” in a subject line to schedule an appointment might be a better idea than “schedule” or “calendar.”

Again, these are just starting points for your own testing and/or possible things to try if you’re one of those non-trackers. The biggest takeaway from the Yesware study, however, seems to be that there’s absolutely  no magic-bullet, across-the-board rules form emails.

Here are some other myths the Yesware study seemed to uncover:

1. Monday is NOT the best day to send emails. The study found that weekends actually have the highest engagement, and during the week, no one ay showed a significant advantage over any other.

2. The early bird doesn’t always get the worm. This is only partially true. Emails sent between 6 a.m. and 7 a.m. had high response rates, but do did those sent around 8 p.m. These are response rates, mind you, which means they not only got opened but were compelling enough to get a response. If a response is what you’re after, it might be a good idea to test these times – both against what you’re doing now and against each other.

Make of these statistics what you will. It’s sometimes helpful to know what’s working in other businesses, so that you can compare it to what you think is or isn’t working in your own.

Note: This article was excerpted from a recent Master Marketer weekly business report. You can test-drive my Master Marketer membership for 30 days for just $1.000 by clicking here. During your 30-day test drive, you’ll have access to several years of my marketing studies, lead generation advertisements, and lead conversion strategies.

Results of emailing every day?

Results of emailing every day?

I get mail… (okay, complaints)

I get mail… (okay, complaints)

How to Have Fun, Add Value, Sell More Homes & Build an Asset With Long-Term Value

How to Have Fun, Add Value, Sell More Homes & Build an Asset With Long-Term Value

The Curse of Sameness

The Curse of Sameness