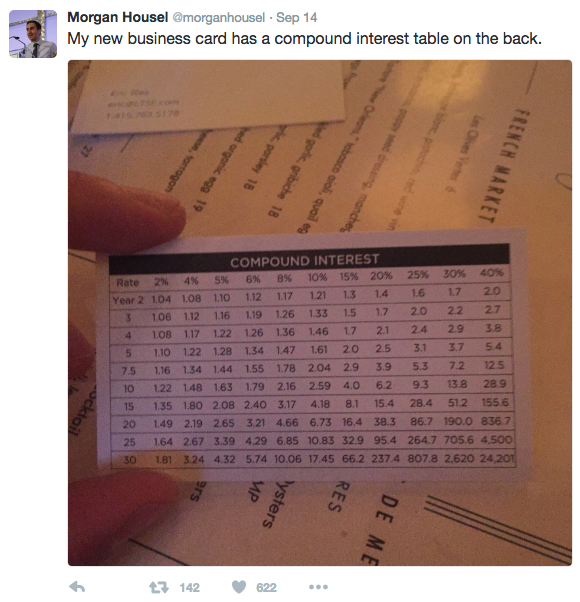 Compound interest is truly magical. It’s how you can make thy money multiply.

Morgan’s new business card reminded me of a book I read a few years ago titled, “The Single Best Investment: Creating Wealth with Dividend Growth.” It’s a great book if you’re interested in investing in the stock market. My favorite part of the book is the authors notes on compound interest.

Here is a glimpse of what he wrote:

“At the risk of sounding repetitive and boring, I’ll say this again: the Single Best Investment strategy is not about “playing the market.” It’s about creating a kind of compounding machine that sits quietly off in the corner working for you while you go about your business. It’s about harnessing the true power of time and growth, the incredible accumulation of modest gains into enormous ones which is the essence of compounding.

The gains are like bricks: you slowly and carefully place on atop the other. By and by – though not instantly – the shape of a building emerges. Once you’ve got a strong structure, the building can last many lifetimes, and you can furnish it with valuable antiques and art, or add rooms, or change around the partitions to make a new floor plan. The bricks of this compounding building aren’t like the bricks you know. These bricks have the ability to generate new bricks, like a living thing. And these bricks can grow larger, like a living thing. And the bricks that they generate can grow larger, too. It is fecundity on earth, it is fruitfulness, it is multiplying, it is increase, it is like the universal process of cell division and proliferation that’s ultimately behind the very creation of our bodies.

Over the Labor Day holiday we had a big cookout with all of my cousins. Two of my cousin’s sons have started their own businesses and are doing very well. After dessert, we started talking about business and investing. They asked, “What’s the biggest lesson you’ve learned about making money?”

My answer –> You learned it in school, but probably didn’t see the real value of what you learned. I was obviously talking about compound interest.

I’m not sure why, but it doesn’t seem like we figure out how powerful compound interest is until we’re older. This is crazy because it has the most power when put into motion early. I’m sure you have a similar memory of seeing a compound interest chart while in high school, but not realizing the significance of it. I really wish my teacher had jumped up on the table and yelled..

“This is the most important chart you’ll ever see in your life. This is the secret to financial freedom and living life on your terms. This will change your life IF you use it to your advantage.”

Unfortunately, this didn’t happen. The compound interest lesson was a typical boring class. I would have paid more attention, if the teacher had really shown its power.

Lowell Miller, the author of the Single Best Investment book wrote something else that I thought I would share with you:

To make thy money multiply, you need a total investment process that harnesses the power of compounding in a positive way, that’s pervaded by compounding.

Rebel Without A Crew

Rebel Without A Crew

How to Compound Your Life

How to Compound Your Life