Picture the iPhone. This incredible gadget was created in Steve Jobs’s mind first. Once he had the idea locked in his thoughts, he built it in real life.

In the video, Jobs said:

“Life can be much broader once you discover one simple fact and that is everything around you that you call life was made up by people that were no smarter than you. You can change it (life), you can influence it, you can build your own things that other people can use. The minute you understand that you can poke life and something will pop out on the other side. You can change it. You can mold it. That’s maybe the most important thing… to shake off this erroneous notion that life is there and you’re just going to live in it vs. embracing it, changing it, improving it, making your mark on it! Once you learn that you’ll never be the same again.”

Jobs was trying to explain how powerful our minds can be in life. We can use our thoughts and ideas to change our lives. We don’t have to accept everything as we see it. There is ALWAYS a way to make something better. This starts with how and what we think. These thoughts can then be expressed in the real world through action.

Jeff Bezos had an idea. This idea was something he called The Everything Store. He turned his idea into one of the most amazing businesses in the world.

Pick any person, or business, you admire and you’ll be able to see that what you admire started as a simple thought. The person poked life just like Jobs said was possible. It’s almost as if we live in a magical dream world. We can think about something and then we can bring these thoughts into reality. We can create what we think about. It’s crazy awesome.

This idea is so big that I honestly can’t put the right words to it.

I’m a very practical person. I’m not what anyone would consider creative. I see things primarily as black or white. I would typically consider all of this stuff as woo-woo, but it’s definitely not. Life is magical and we should be a little crazy with our thoughts. We should poke life and make it better. Why live in a practical black and white world? Why not poke life and see what pops out on the other side?

1. You can use your mind to generate business ideas. These business ideas can be worth tens of millions of dollars. James Altucher recommends listing 10 business ideas each and every day. The reason why he suggests this is to train yourself to constantly think about and see business ideas. Not all of your ideas will be million dollar ideas, but some of them will be.

2. In “Life in Half a Second“, Michalewicz wrote the following: “The well-documented placebo effect, where a patient’s condition improves using bogus medication. Sugar pills have been the most consistent performer in clinical trials over the years, relieving pain, depression, disability, asthma, and other medical conditions as effectively as drugs and surgery.” Here’s a snapshot from the book: 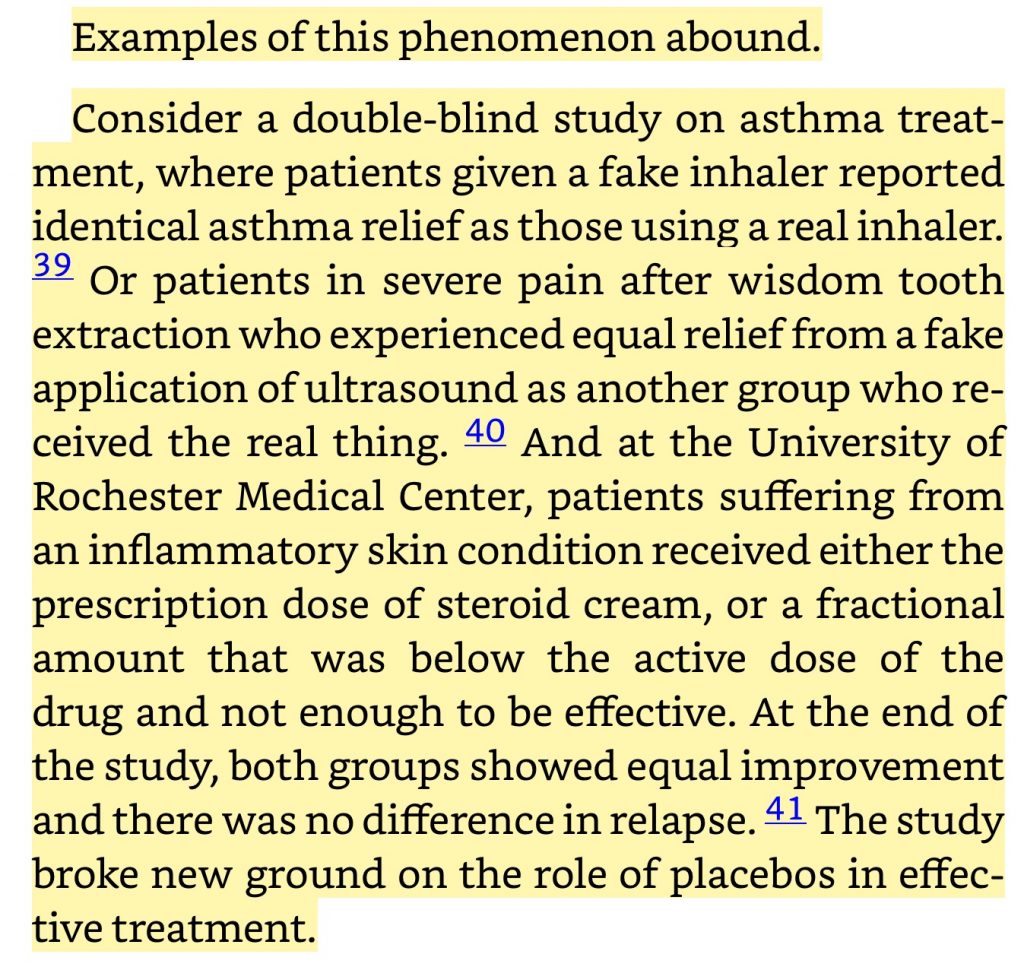 Isn’t the Placebo Effect magical? Is it to me. There is also something called the Nocebo Effect. This occurs when the patients are told of possible negative side effects to a placebo pill and guess what happens? They experience the negative side effects of they were told about. A sugar pill leads to sickness…. all because we think it will happen. You can read more about the Nocebo Effect here.

3. Arnold Schwarzenegger  grew up in a poor family in Austria. When he was a teenager, he stumbled across a magazine featuring bodybuilder Reg Park. The magazine highlighted Reg Park’s story and how he became a movie star through bodybuilding. Something clicked and Arnold saw this as a possibility for himself. An idea he found in a magazine became his reality. Arnold built his body and career in his mind first. Once he locked on this through his thoughts, he built it in real life.

4. Last year, I took my daughter to one of Tony Robbin’s Unleash the Power Seminars. At one point during the seminar, Tony said:

(I’ve actually tried to find a video of this on YouTube and haven’t had luck. This may actually be in the Netflix documentary, but I’m not 100% sure.)

The Tony Robbins we see on stage was first an idea in Tony’s mind. He brought this idea to life and now sells 8,000 seats at his seminars. All of this started with a thought.

Go back and review the first part of this post: “Everything is created twice. The first creation is our minds. The second creation is in reality.”

The first creation is obviously the most important and this is because it dictates what happens in reality. If you don’t create something in your mind, you won’t take action to make it happen in your life. This simply means your thoughts and ideas are the key to any and all change in your life.

How to Poke Life

1. Think a cool idea for your life.
2. Believe you can make the cool idea a reality.
3. Take action to make idea happen.

Thinking IS your most valuable activity – by far.

Nothing, and I really do mean NOTHING, comes anywhere close to the same value in your life.

Are you curious about this?

Are you curious about this?

“So you want to become financially successful? Then you need to…”

“So you want to become financially successful? Then you need to…”