At the age of 9, Henry John Heinz was making, bottling and selling horseradish sauce using his mother’s recipe. He continued to build this business and by the age of 17 was grossing $2,400 a year. This was a large sum of money at the time. He continued to working to build this business with a partner and hit hard times in 1875, when he ended up filing for bankruptcy. This bankruptcy was very difficult for him and he was depressed for many months, because he let down suppliers who trusted him.

However, the following year, he started another company selling horseradish sauce with his mother, brother and cousin. Henry worked every role in this new business including the field, warehouse, processing and sales. Henry slowly rebuilt his confidence in this new business. As his confidence improved, he began experimenting with new products and ended up creating a very tasty ketchup. He didn’t invent ketchup, he simply brought the existing ketchup to a new level.

Unfortunately, his new ketchup wasn’t selling very well and he realized it was because customers wanted to “see” what they were buying. The packaging used for ketchup at this time didn’t allow customers to see the sauce inside. So, Henry started bottling his new ketchup in clear bottles and sales began to increase. He even strategically placed a white label at the top of the bottle to cover the oxidation that occurs at the top of the bottle.

As sales of his ketchup increased, Henry built a large factory in the heart of downtown Pittsburgh. He kept his factory clean, organized and focused on providing a quality “pure” product. He took this cleanliness to such an extreme that employees received daily manicures in order to keep their hands clean and the product germ free. He created a “family atmosphere” at his plant and had many loyal employees for decades.

He also developed an elaborate sales system for his ketchup designed to get new customers to simply try his ketchup for free. He believed that if someone tasted his ketchup they would buy it. His sales system included little sample packages that included ketchup, plate and a cardboard spoon.

During this time, railroads were giving businesses the ability to expand. Henry leveraged the railroads in two ways:

1. Getting larger supplies of fresh vegetables to his factory for production.

2. Traveling the country promoting and selling his product to grocery and general stores using his sales system.

In 1893, Henry wanted to feature his products and offer samples at the Chicago World Fair. When they arrived, they were disappointed because their designated location was on the 3rd floor. Henry knew that nobody would climb three flights of stairs to visit his booth. On the fly, he decided have small gold foil tags printed that read:

“Bring this to the Heinz Booth on the 3rd Floor for a FREE Prize!”

This idea led to hundreds of thousands of people coming to his booth and his booth became the hit of the entire fair.

As his business grew, competitors began copying his methods. This was at a time when there were no free trade rules and many competitors operated in a fraudulent manner. In order to stifle these competitors, he purchased all of the bottles on the market so that his competitors couldn’t bottle their ketchup. He had so many bottles at one point, he loaded them onto a large barge and sank it in the Allegheny River. Another strategy he used to eliminate competitors was to market how pure and clean his products were compared to others.

There were no consumer protection laws and many people would become sick from purchased food that was contaminated. Henry lobbied for new laws to protect consumers from toxic additives. He won the backing of large newspapers and magazines as a consumer advocate while most businesses were against new legislation. When the food act was brought into law in 1906, his company flourished because it already followed all of the required guidelines. Many of his competitors were forced out of business. In this advertisement, you’ll see how he leverages the quality of his products: 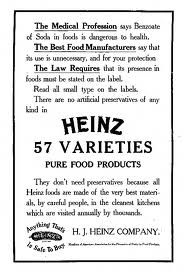 Henry’s wife was sick and he wanted to take her on a trip to Germany. On the trip, he scheduled many “product demonstration” stops where he would allow businesses in London to sample his ketchup. His elaborate sales system worked and he began shipping his products overseas at a time when Europe didn’t import food from the states. Henry was always looking to expand his company’s reach and increase his market share.

On a trip to New York, Henry saw a billboard advertising “23 shoe styles.” He began counting the number of products his company developed and on his count locked into the number “57.” He went on to use this number in all of his advertising. By advertising 57, he was showing the public that his company had numerous products and turned into a “Unique Selling Proposition.”  He added “57” to all of the product labels, billboards, advertisements and even had it etched into white sand stone on hillsides throughout the country. ” The “57” has become one of the greatest marketing ideas throughout history. 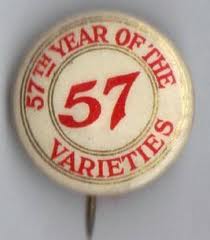 At one point, Henry ended up purchasing the house where his original business started. He lost this house in the bankruptcy. He had this house moved on to a barge and floated it down the Allegheny River to his factory. The was a huge publicity stunt as thousands lined the river banks to see.

Henry once said the secret to success was…

“To do a common thing, uncommonly well!”

Most would attribute this saying to Henry’s ability to making ketchup and other sauces. However, I think it might be better to attribute this saying to Henry’s ability as a marketer. He was an exceptional marketer. Although Henry didn’t invent ketchup, he ended up marketing it better than anyone in the world. The Heinz Company now has 33,000 employees worldwide and over 8 billion in annual sales. They currently control 98% of the market share for ketchup in the United States.

Here are 6 takeaways to consider:

1. Failure is temporary. Heinz filed for bankruptcy and within a short period of time had dusted himself off and started over.
2. You don’t have to invent something “new” to be successful in your business. You simply have to become a better marketer.
3. Do you have a unique selling proposition? You should. Why should someone do business with you instead of someone else?
4. In order for any business to be successful, it must have a system for selling.
5. Leverage every opportunity to your advantage.
6. Work hard to earn and keep the trust of your clients.

The Best Books for Entrepreneurs

Use Sales Assets to Build Your Dream Business

If you liked this article, consider test driving my Master Marketer Membership here.

Case Study: How To Improve Your Marketing

Case Study: How To Improve Your Marketing