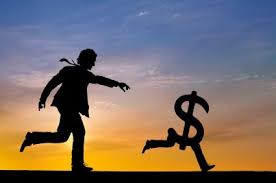 From time to time, we find ourselves in what I call “chasing” mode.

CHASE: an act of pursuing someone or something

Depending on your business, you might actually spend most of your time in chasing mode. Chasing isn’t fun and sucks the enjoyment out of life. We chase because we’ve created a situation where we think we need whatever it is we’re chasing.

Throughout my journey, I’ve chased all of the above and more. To be 100% honest, I absolutely hate chasing, because it feels as if we’re devaluing ourselves when we chase.

For years I chased leads. I would make follow up phone calls from 6 to 8pm two nights a week and again on Sunday afternoons. My method of chasing was to “dial for dollars.” I would continue calling every lead until I got them as a client, or they told me to never contact them again. I then followed this process when I decided to recruit agents for my business. I chased and chased trying to get them to move their license to my company.

I was miserable and hated real estate.

This idea applies to everything.

Have a rental property and the tenant isn’t paying? File the eviction. If the tenant wants to stay, they’ll have to chase you. If the tenant doesn’t chase you, get them out and start over with a better tenant. Don’t chase them. They pay what they owe, or they move. The end result is the same; however, the chasing is eliminated.

Want to sell a certain number of homes each month? Setup a marketing system where prospects chase you to be their agent. They either hire you as their agent, or they don’t. The end result is the same; however, the chasing is eliminated.

Want to get other agents to join your team? Create a system where they’ll make more money working with you then anywhere else. They’ll either join your team, or they won’t. The end result is the same; however, you didn’t chase them.

You know chasing isn’t the best approach to business. You live this with almost every home sale negotiation. Whichever agent is pursuing the other agent in the negotiation always loses the negotiation. Their client ends up losing money because they chased.

A great example of this can be found in a recent episode of Million Dollar Listings New York titled, “You Got Yourself a Deal!” Here is a clip from this episode:

Instead of allowing his client to pay this outrageous price, Luis decided to do things differently.  He stopped chasing completely and setup a large open house marketing the space for sale without the last apartment. When Ryan Serhant and his seller thought they lost the sale, they came down in price significantly in order to make the deal.

Whether you like the show or you don’t, this is a great example of changing an approach to eliminate chasing. It does require some creativity and thinking outside the box, but this is such a better way to approach business. It is a lot more fun and enjoyable.

Take some time this week to think about where you might be chasing in your life.  Start thinking about how you might do things differently so that you can accomplish what you want without having to chase… anyone for anything.

Buy Me a Boat…

Buy Me a Boat…