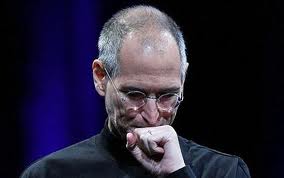 I shared part one of my article on how Steve Jobs transformed Apple last week.  This week will dig a little further into Steve’s relentless work ethic. From “Inside Steve’s Brain” by Learner Kahney…

“I’d never been so tired in my life,” Jobs told Fortune in 1998. “I’d come home at about ten o’clock at night and flop straight into bed, then haul myself out at six the next morning and take a shower and go to work. My wife deserves all the credit for keeping me at it. She supported me and kept the family together with a husband in absentia.”

Another entrepreneur I’m good friends said he threw away “The Four Hour Workweek” after reading this quote about Steve Jobs. To build a great business, you’ve got to put the time in. There are no short cuts. My favorite quote from “Inside Steve’s Brain” is this one:

“I’m looking for a fixer-upper with a solid foundation. Am willing to tear down walls, build bridges, and light fires. I have great experience, lots of energy, a bit of that ‘vision thing’ and I’m not afraid to start from the beginning.”

Remember how you would include an “objective” in your resume? Well, the quote above is actually is Steve’s objective from his resume:
(click to enlarge) 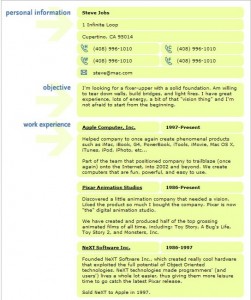 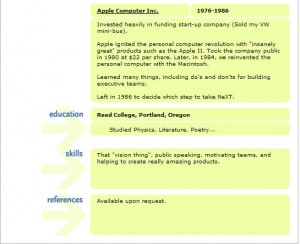 Now, I’m not entirely sure this is his real resume, but it’s inspiring none the less. How would your resume read? Are you willing to tear down walls, build bridges and light fires? Are you afraid to start from the beginning? I hope not, because this tenacity is needed to succeed in real estate today.

Let’s move on to marketing, because Steve Jobs is a Master Marketer. Throughout “Inside Steve’s Brain”, I found many stories detailing Jobs as a great marketer. He is constantly thinking about selling. Advertising is a key part of Apple’s communication with its customers.

“My dream is that every person in the world will have their own Apple computer. To do that, we’ve got to be a great marketing company…. Jobs immediately boosted Apple’s advertising budget from $15 million to $100 million. The goal was to make Apple “first and foremost a product marketing company.””

Did you catch the last sentence? The goal was to make Apple a marketing company. This very BIG, because it’s significantly different than what you might think. Remember, Apple was teetering on the verge of bankruptcy. Would you have the guts to increase your advertising budget over 600% when cash-flow was tight? At Apple with Jobs directing the ship, marketing has always been one of its key strategies. The company has used advertising as an extremely important and effective way to distinguish itself from the competition.

“Apple is famous for its lifestyle advertising. It never loads its ads with speeds and feeds, functions and features, like everyone else. Instead, Apple engages in lifestyle marketing. It portrays hip young people with “enviable lifestyles,” given to them courtesy of Apple’s products. The company’s highly successful iPod ad campaign shows young people grooving to the music in their heads. There is never any mention of the iPod’s hard-drive capacity.”

This advertising strategy is the exact opposite of other companies selling computers and electronic gadgets. Skim some of the advertisements for other electronics and computers and you’ll see the difference very quickly.

“Jobs’s product presentations are also integrated into big, coordinated advertising campaigns that are executed with a precision that would impress a general. The campaigns combine rumor and surprise with traditional marketing, and rely wholeheartedly on secrecy for their effectiveness. On the outside it can look somewhat chaotic and uncontrolled, but they are tightly planned and coordinated.”

In fact, I was amazed to learn that Apple plans their product launches way in advance in great detail. Here’s how it works as explained in “Inside Steve’s Brain:”

“A few days ahead of a product presentation, Apple’s PR department sends out invitations to the press and VIPs. The invitation gives the time and location of a “special event” but contains scant information about its nature or any upcoming products that might be revealed. It’s a tease. Jobs is effectively saying, “I’ve got a secret; guess what it is.” Immediately, tongues start wagging. There’ll be an explosion of blog posts and press articles speculating on what Jobs will announce. In years past, the speculation was limited to specialist Apple websites and fan forums, but more recently the mainstream press also reports the rumors. The Wall Street Journal, the New York Times, CNN, and the International Herald Tribune have all written breathless articles looking forward to Jobs’s product presentations. The rumormongering surrounding Macworld 2007–where Jobs introduced the iPhone–even made the nightly news on all the cable and TV networks, which is unheard of for any company in any industry.

Not even Hollywood can garner as much attention for its movie premieres. This kind of worldwide publicity is worth many hundreds of millions of dollars in free exposure. The launch of the iPhone in January 2007 was the biggest to date.

Standing onstage in San Francisco, Jobs single-handedly eclipsed the much larger Consumer Electronics Show in Las Vegas, which was happening at the same time. The CES is more important economically than Macworld, yet Jobs and the iPhone handily stole its thunder. Jobs’s iPhone launch also overshadowed announcements from much bigger companies, including the introduction of the consumer version of Microsoft’s Vista, and became the biggest technology story of the year. Harvard Business School professor David Yoffie estimated that the iPhone rumor reports and follow-up stories were worth $400 million in free advertising.

It was so successful that Apple didn’t spend a penny to advertise the iPhone before its launch. “Our secret marketing program for the iPhone was none,” Jobs told Apple employees in a company wide address. “We didn’t do anything.”

Didn’t do anything? Come on. They followed every successful marketing strategy in the book. It’s pretty obvious that Steve Jobs accomplished his goal and turned Apple into a great marketing company. He is a Master Marketer and there is a lot for you and I to learn from what he has accomplished.

I hope you enjoyed this article and if you’d like to learn more about Apple and Steve Jobs, I strongly recommend “Inside Steve’s Brain.” I absolutely loved the book and learned a great deal!