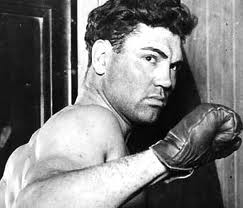 This photo is of James Braddock.

Back in the 1920’s and 1930’s boxers were the most famous people on the planet.  As an example, in 1935 the average attendance for a Yankees home game was just under 9,000 fans. In the same year, Max Baer fought Joe Louis at the Yankees stadium in a non-title bout with over 100,000 in attendance.

From the preface of the book Cinderella Man about the greatest upset in boxing history:

“… the heavyweight champion wasn’t just the best-paid or the most significant athlete in the world; he was – with the possible exception of a few world leaders, such as Stalin and King George V – the most famous person on the planet.”

How was this so? How could one non-title fight draw 100,000 people when only 9,000 go to a Yankees baseball game? Remember this was before TV, so these fights weren’t plastered all over the boob-tube. Well, most people got their information about what was going on in the world from the the newspapers.

Now, it wasn’t just that the fights were published in the newspapers. The sports writers actually turned these boxers into legends. They created ethnic and racial rivalries that the fans loved. According to Cinderella Man...

“And at a time when the heavywieght champion of the world mattered in a way in which no athlete now matters, Americans of all hues and ethnicity found inspiration in the story of a man who rose, … from relief (rags) to royalty.”

Before I get into how we might use this to our advantage, let’s spend a minute on $$$. Again I’ll return to the book Cinderella Man for some perspective…

“On September 22, 1927, for thirty minutes’ work – plus nine minutes of catching his breath between rounds – Gene Tunney made $990, 445 in his second fight against Jack Dempsey, more money than Babe Ruth had made in his fourteen major league seasons to that point.”

This income distortion also flows through to the sports writers. One of the best sports writers at that time was Grantland Rice and it was reported that he was making more money than many of the athletes he covered. In fact, he was said to make $250,000 a year in the 1930s when the country was still fighting through the Great Depression.

This all cool and interesting, but what can we learn from it?

Well, we can become sports writers and turn our clients into legends. This is one of the strategies I used to triple the home sales in my real estate business. One of my real estate clients bought 20 homes in 12 months. At the time, he worked 60+ hour weeks as an engineer for one of the largest car manufacturers. He didn’t enjoy his work and his goal was to use the income generated from these 20 properties to “retire.” I just had lunch with him last week and he is still “retired.”

In essence, the idea is to turn a simple testimonial into a compelling story. This story is then weaved into your lead generation and your lead conversion systems. I used this strategy so much that this one client became a celebrity in our area. Many of our clients wanted to meet him, get their picture with him, and learn more about what he did. If we had a client appreciation event, he was always surrounded by prospects and clients. It was pretty cool.

This strategy led to hundreds of new clients and home sales for my real estate business. It worked so well, that I simply repeated it with other clients. Other clients didn’t buy 20 homes, but they had neat stories and these stories are very compelling. You can do the same thing in your business. Turn your clients into celebrities by simply sharing their stories in your lead generation and lead conversion systems.

The odd part is that I used this strategy extensively in all of my marketing campaigns and other agents completely missed it. Sure they read about my clients buying multiple homes, but they didn’t SEE the strategy of turning clients into celebrities as a way to generate and convert leads for their businesses. Other agents were too focused on trying to turn themselves into celebrities by running tons of image advertising saying they were the best. In what I’ve shared from boxing, you should be able to see that these boxers were turned into celebrities by the sports writers. These celebrity boxers made large sums when they boxed because demand to see the fights sky rocketed. In the process, the sports writers also got rich because newspaper publishers needed the compelling stories to sell more newspapers.

Telling compelling stories is very profitable on many levels.

Please understand you don’t need a client to buy 20 homes to use this strategy. You simply need one client that has a neat story and I’ve found that every single client has a neat story. You simply need to uncover the story and share it in your marketing. If you dig a little, you might find a client who tried to sell their home for months without luck before they met you. Or maybe it could be about an investor who bought their first foreclosure. Or it could be about a family that struggled through hard financial times and finally bought a home. Your role, should you decide to accept it, is to become the sports writer and tell their stories in a compelling way.

In fact, experiment with creating an entire marketing campaign around one of your clients. You might be surprised when it turns into your best campaign!

Before I wrap this up, I thought I would share more finding from my business about turning clients into celebrities. At one point in my journey to build my business, I actually hired a celebrity, who was also real estate investor, to endorse me, my books and our approach to investing. I paid thousands of dollars for this endorsement. However, this celebrity endorsement didn’t result in any increase in sales. For my business, it was significantly better to create my own celebrity(s) than it was to hire one.